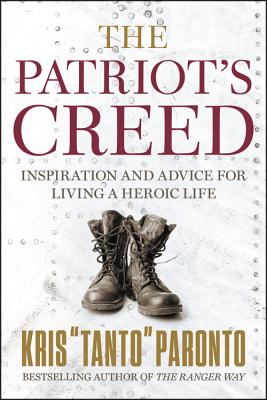 Inspiration and Advice for Living a Heroic Life

Army Ranger and bestselling author Kris Paronto reveals the values and creed shared by special forces for self-improvement and living a purposeful life.
When Kris Paronto began talking with civilians about his experiences fighting the terrorist attack on the US State Department Special Mission Compound in Benghazi, Libya on September 11, 2012, he was surprised at how often people told him that the story of his extraordinary battle gave them courage to face tough times in their everyday lives. "The odds were stacked against us that night but the truth is that we refused to quit and we beat them with faith, teamwork, and the principles that were first instilled in me when I joined the Army. You can find those in the Rangers Creed and the Army Values," he says, "and you don't have to be a Special Operations soldier to use them."
In The Patriot's Creed, Kris Paronto uses the seven core Army Values that all soldiers learn in Basic Combat Training, and the experiences of other servicemen and women and First Responders, to explain how anyone can improve themselves, the world around them, and live a heroic life. The stakes are dramatic for the brave men and women who put their lives on the line to fight for America, and too many of their acts of courage and honor are unknown. The examples of their persistence and discipline will be inspiring to anyone facing seemingly insurmountable obstacles.
At a time of national polarization, Kris Paronto draws attention to values all readers can share and use, and to the honor, integrity and courage of true patriots who have gone to great lengths to protect and serve. They embody the best of us and make Kris Paronto proud to be an American soldier.

Praise For The Patriot's Creed: Inspiration and Advice for Living a Heroic Life…

Praise for The Ranger Way:
"Tanto's book is proof that Rangers lead the way both in and out of the military. This is a must-read for anyone who wants to improve their life."—Brandon Webb, former Navy SEAL sniper and New York Times bestselling author of The Red Circle

"Kris 'Tanto' Paronto took his life of hard-earned experience, which ranges from long days as an aspiring Ranger to the cauldron of combat as a CIA contractor, and boiled it down into invaluable life and leadership principles. Whether you are in the boardroom or on the battlefield, this memoir will provide you a master class in how to succeed no matter how harrowing the situation may be."—Marty Skovlund, Jr., author of Violence of Action: The Untold Stories of the 75th Ranger Regiment in the War on Terror

"Kris Paronto epitomizes the courage, leadership, and discipline that selfless Americans who have fought for and defended freedom and liberty have exhibited from the founding of this nation to the present. Calling him my friend is gratifying."—David A. Clarke Jr., sheriff of Milwaukee County, Wisconsin

Kris "Tanto" Paronto is a former Army Ranger from 2nd Battalion, 75th Ranger Regiment and private security contractor who has deployed to South America, Central America, the Middle East, and North Africa. He is the coauthor, with Mitchell Zuckoff and the five surviving security team members, of the New York Times bestselling book 13 Hours, describing his experiences responding to the 2012 terrorist attack on the U.S. Special Mission in Benghazi and Libya. He is also the author of the USA Today bestselling book The Ranger Way, in which he shares stories from his training experiences as an Army Ranger and how their lessons can be applied to civilians in search of discipline, motivation, success, and peace in their lives.
Loading...
or support indie stores by buying on