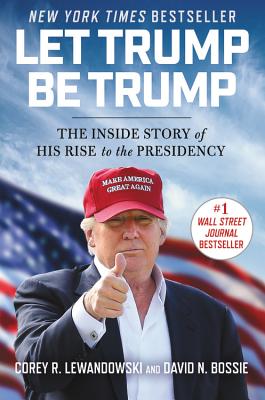 Praise For Let Trump Be Trump: The Inside Story of His Rise to the Presidency…

"Bossie and Lewandowski pull back the curtain on the 2016 campaign-a wild, fun, and historic ride."—Laura Ingraham

"These guys were in the room for the wildest presidential campaign in recent history. The stories are all here. Very entertaining and informative."—Mark Levin

"Hillary, do you want to know what really happened? Read this book! Corey Lewandowski and Dave Bossie take you deep inside the phenomenal Trump campaign. Let Trump Be Trump is written with true insight and understanding of America's greatest presidential candidate, and once you begin this story, I promise you will not put it down until you finish."—Sean Hannity

"Key leaders of the growing conservative movement, Corey Lewandowski and Dave Bossie helped make Trump president and tell Trump's winning story like no one else has-from the inside."—Newt Gingrich, Former Speaker of the House

"... paints a portrait of Mr. Trump that shows him as he is." —The New York Times

"... chutzpah on an epic scale" —The Economist

"It's as close as we're likely to get to a "What Happened" from the winning side...written by the people who were in the room at the time and not filtered through leaks and second-hand anecdotes. That sets it apart from other books on 2016." —Townhall

"...a political book can't get much better than this."—American Spectator

"...the first book to have been published by Trump campaign insiders...gossipy tidbits, of which there are many." —New Republic

"...revealing passages of what it's like to work for Mr. Trump."
—CBS News

"Far from being dismayed by Trump's rough edges, Lewandowski and Bossie celebrate them."—Times of London