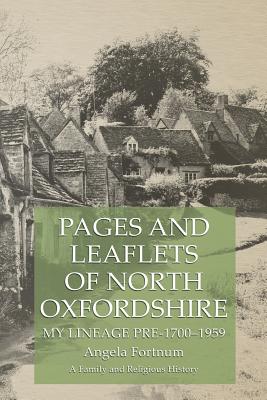 Pages and Leaflets of North Oxfordshire

Every family has a story. And for Angela Fortnum, her maternal family story would begin eight generations before her and reach back to the turn of the eighteenth century in England-and it is a story that she will tell and continue today. In Pages and Leaflets of North Oxfordshire, author Angela Fortnum shares a well-researched family history of her maternal grandfathers, offering a compelling window into the life and times of her ancestors. This history chronicles the Page family's shift from agricultural and labourer life to self-employment and small holding, and it also lists the changes in the family's religious beliefs over time. Angela includes as well a discussion of the richness and diversity of the church and chapel buildings that were linked in some way to her family, each of which tells a story of their own. In the end, the story of the Page family lives on today, as Pages and Leaflets of North Oxfordshire stands as a legacy to Angela and her mother's family and the great changes they experienced over the centuries.

Angela Fortnum was born in Banbury, Oxfordshire, and she attended school in the town before fulfilling her desire to work in a bank. She began working at National Provincial Bank in 1965, which is now a part of the Royal Bank of Scotland Group, and in 1982 she took a permanent position in Birmingham and moved to Shirley near Solihull in the West Midlands. Following early retirement in 1998, she returned to Banbury and took a course in health and social care, for which she received a certificate. After her mother's death, Angela rekindled her interest in genealogy and now shares a tribute to her mother in Pages and Leaflets of North Oxfordshire.
Loading...
or support indie stores by buying on
(This book is on backorder)