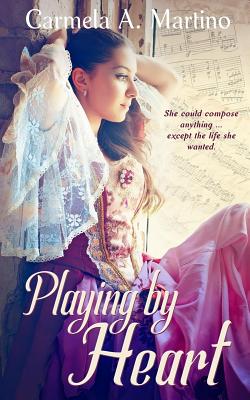 Emilia Salvini dreams of marrying a man who loves music as much as she does. But in 18th-century Milan, being the "second sister" means she'll likely be sent to a convent instead. Emilia's only hope is to prove her musical talents crucial to her father's quest for nobility. First, though, she must win over her music tutor, who disdains her simply for being a girl. But before she can carry out her plan, a tragedy sends the family into mourning. In her sorrow, Emilia composes a heartrending sonata that causes the maestro to finally recognize her talent. He begins teaching her music theory alongside Antonio Bellini, the arrogant great-nephew of a wealthy marquis. Emilia's feelings toward her rival gradually change as she strives to outdo him. But just when her dreams seem within reach, Emilia learns that her success could destroy not only her future but her sister's life.

Carmela Martino is an author, speaker, and writing teacher who lives in the Chicago area. She wrote the middle-grade novel, Rosa, Sola, while working on her MFA in Writing for Children and Young Adults at Vermont College. The novel was named a Booklist "Top Ten First Novel for Youth" and received the Catholic Writer's Guild Seal of Approval. Her other credits for children and teens include short stories and poems in magazines and anthologies. Her articles for adults have appeared in such publications as the Chicago Tribune, Catholic Parent, Writer's Digest, and multiple editions of the annual Children's Writer's and Illustrator's Market. Carmela has taught writing workshops for children and adults since 1998, and she blogs about teaching and writing at www.TeachingAuthors.com. You can read more about her at www.carmelamartino.com and follow her on Facebook at www.facebook.com/carmelamartinoauthor.
or
Not Currently Available for Direct Purchase
Copyright © 2020 American Booksellers Association