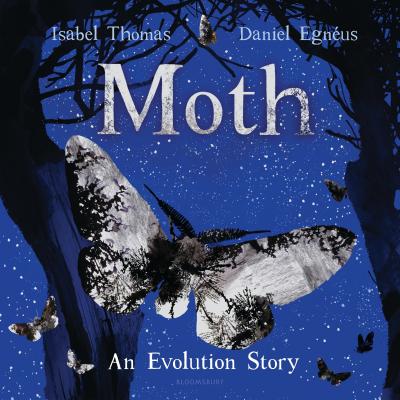 Powerful and visually spectacular, Moth is the remarkable evolution story that captures the struggle of animal survival against the background of an evolving human world in a unique and atmospheric introduction to Darwin's theory of Natural Selection.

“This is a story of light and dark…”

Against a lush backdrop of lichen-covered trees, the peppered moth lies hidden. Until the world begins to change...

Along come people with their magnificent machines which stain the land with soot. In a beautiful landscape changed by humans how will one little moth survive?

A clever picture book text about the extraordinary way in which animals have evolved, intertwined with the complication of human intervention. This remarkable retelling of the story of the peppered moth is the perfect introduction to natural selection and evolution for children.

“From its striking silver-plated cover on, this is a stunner. . . A gorgeous blend of text and illustrations and a wonderfully successful introduction to nonfiction for younger readers.” —Booklist, starred review

Isabel Thomas studied Human Sciences at the University of Oxford. She is a science writer and children's author who has been shortlisted for the Royal Society Young People's Book Prize, the ASE Science Book of the Year, and the Blue Peter Book Awards. Isabel also writes for children's science magazine Whizz Pop Bang, and for science outreach projects. She is a primary school governor and STEM Ambassador.

Illustrator Daniel Egneus is a rising star in the book world. Most recently he illustrated the UK edition of Neil Gaiman's American Gods. He has also worked on the Raven Child and the Snow Witch, as well as The Thing. He is a well-regarded fashion artist, regularly illustrating for the likes of Chanel, H&M, Nike and many more.