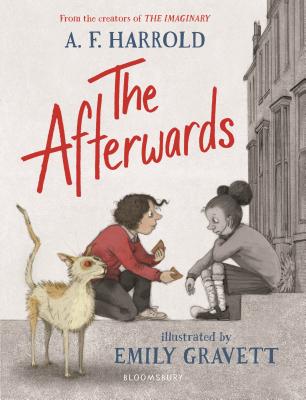 From the acclaimed team behind The Imaginary comes another powerful, poignant, and darkly fantastical story about friendship, perfect for fans of Neil Gaiman and Roald Dahl.

Ember and Ness are best friends, completely inseparable. Ember can't imagine what life would be without Ness. Until Ness dies, in a most sudden and unexpected way. Ember feels completely empty. How can this even be real?

Then Ember finds a way into the afterworld-a place where the recently dead reside. She knows there must be a way to bring Ness back, so she decides to find it. Because that's what friends do: rescue each other. But the afterworld holds its own dangers. How far will Ember go to make things the way they were again?

Paired with enchanting illustrations from Emily Gravett, A. F. Harrold's powerfully woven tale explores the lengths we go to for the people we love.


Praise For The Afterwards…

“Gravett's full-color illustrations perfectly channel Harrold's narrative . . . Gripping and poignant, a look at what it means to be brave and alive in the face of loss.” —Kirkus Reviews, starred review

“Aided by Gravett's evocative art, Harrold brings this eerie . . . tale about accepting change, letting go, and love's indissoluble bonds to an affecting finale that is very much grounded in real life.” —Publishers Weekly

“Harrold brings a delectable combination of coziness, sympathy, and menace to this story . . . and Gravett's soft and friendly watercolor and pencil art . . . further ground the adventure, making this an accessible story of controlled shivers and heartfelt compassion.” —BCCB

"Readers of the author/illustrator pair’s The Imaginary will find familiar their ability to invent imaginatively creepy magic and use it to explore real-life emotions." - Horn Book Magazine

“A great choice for readers who like fantastic tales with a dose of true scariness.” —School Library Journal, starred review, on THE IMAGINARY

“Affecting and lovely.” —The New York Times Book Review on THE IMAGINARY

“[A] winningly whimsical celebration of the imagination, beautifully enhanced by both black-and-white and full-color illustrations.” —Booklist on THE IMAGINARY

“Masterfully paced and stunningly crafted.” —Shelf Awareness, starred review, on THE SONG FROM SOMEWHERE ELSE

“Strong characterizations and a good dose of spookiness are standouts.” —School Library Journal, starred review, on THE SONG FROM SOMEWHERE ELSE

“Captivating.” —Kirkus Reviews, starred review, on THE SONG FROM SOMEWHERE ELSE

“Incisive [and] poetic.” —The Horn Book Magazine, starred review, on THE SONG FROM SOMEWHERE ELSE

A.F. Harrold is an English poet (1975 - present). He writes and performs for adults and children, in cabaret and in schools, in bars and in basements, in fields and indoors. He was Glastonbury Festival Website's Poet-In-Residence in 2008, and Poet-In-Residence at Cheltenham Literature Festival in 2010. He won the Cheltenham All Stars Slam Championship in 2007 and has had his work on BBC Radio 4, Radio 3 and BBC7. He is active in schools work, running workshops and slams and doing performances at ungodly hours of the morning, and has published several collections of poetry. He is the owner of many books, a handful of hats, a few good ideas and one beard.

Emily Gravett is an award-winning children's author and illustrator who lives in Brighton, England. She is the winner of the Kate Greenaway Medal for Wolves and Little Mouse's Big Book of Fears.
Loading...
or support indie stores by buying on