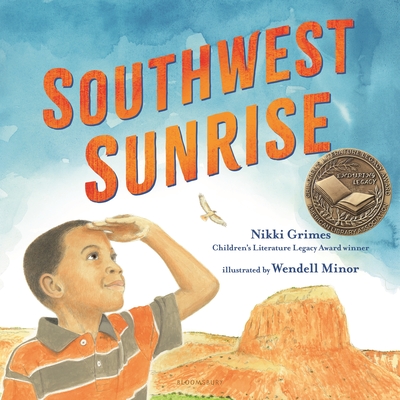 From Children's Literature Legacy Award winner Nikki Grimes and highly-acclaimed illustrator Wendell Minor comes a stunning picture book about the beauty of the natural world and finding a new place to call home.

The beauty of the natural world is just waiting to be discovered . . .

When Jayden touches down in New Mexico, he's uncertain how this place could ever be home. But if he takes a walk outside, he just might find something glorious.

Flowers in bright shades . . .
Birds and lizards and turtles, all with a story to tell . . .
Red rock pillars towering in the distance . . .
Turquoise sky as far as the eye can see . . .

Perhaps this place could be home after all.

Gorgeously poetic and visually stunning, this story from acclaimed creators Nikki Grimes and Wendell Minor celebrates the beauty of the Southwest as a young boy sees it for the very first time.

“Grimes' lyrical prose captures the sights and sounds of the land of enchantment. . . Upbeat, eye-catching, and guaranteed to convince even reluctant newcomers to New Mexicans.” —Booklist

“The hallmark of Southwest Sunrise is the faith it puts in readers . . . lively.” —Shelf Awareness Pro

“Jayden's experience of focusing on the beauty before him rather than on what he has left behind is an endearing example of making the best of a new situation.” —Horn Book Magazine

“Gorgeous.” —The New York Times on ONE LAST WORD

“Every page of One Last Word seems to offer a new treasure.” —Entertainment Weekly on ONE LAST WORD

“It is simple. Nikki Grimes is a sculptor. She has molded, yes, molded muscular poems, full of wit and wisdom, into a marvelous tribute to the Harlem Renaissance poets. And she's done this by carving Golden Shovels--a fun, yet challenging form that will invariably inspire children and adults alike--into something solid, something true.” —Kwame Alexander, Newbery Medal-winning author of THE CROSSOVER, on ONE LAST WORD

“Timely and thought-provoking. . . . Grimes' choice of form, the Golden Shovel poem, does the magic of weaving generations of black verbal artistry into a useful, thematic, golden thread.” —Kirkus Reviews, starred review, on ONE LAST WORD

“Grimes powerfully transposes the original poems' themes of racial bias, hidden inner selves, beauty, and pride into the here and now. . . . A remarkable dialogue between past and present.” —Publishers Weekly, starred review, on ONE LAST WORD

“Innovative and powerful. . . . A beautiful new homage to the Harlem Renaissance but also a moving reflection on the African American experience and the resilience of the human spirit.” —School Library Journal, starred review, on ONE LAST WORD

“Between the covers of this compact volume lies artistic, literary, sociocultural, and curricular gold. . . . Simply essential.” —BCCB, starred review, on ONE LAST WORD

Nikki Grimes is the recipient of the 2006 NCTE Award for Excellence in Poetry for Children. Her distinguished works include ALA Notable book, What is Goodbye?, the novels Jazmin's Notebook, Dark Sons, and The Road to Paris (Coretta Scott King Author Honor Books). Creator of the popular Meet Danitra Brown, Ms. Grimes lives in Corona, California.

Wendell Minor is the award-winning and bestselling illustrator of numerous books, including Ghost Ship, by Mary Higgins Clark. He lives in Washington, Connecticut.
Loading...
or support indie stores by buying on
(This book is on backorder)