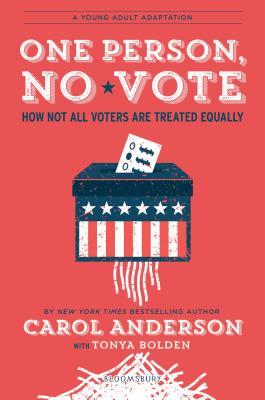 One Person, No Vote (YA edition)

How Not All Voters Are Treated Equally

“Far from an isolated event, the 2016 election was the culmination of generations of efforts to prevent communities of color from taking part in elections and having the full weight of their votes counted. One Person, No Vote comes at a time when we need every piece of knowledge available to turn the tide of voter suppression and reclaim our democracy. Through exhaustive research deconstructing and explaining decades of policy, Carol Anderson provides a clear look at how laws were bent through the slow degradation of democracy and how circumstances can be righted once more.”
— Amanda Ibarra, Flyleaf Books, Chapel Hill, NC
View the List

This young adult adaptation brings to light the shocking truth about how not every voter is treated equally. After the election of Barack Obama, a rollback of voting rights occurred, punctuated by a 2013 Supreme Court decision that undid the Voting Rights Act of 1965. Known as the Shelby ruling, this decision allowed districts with a history of racial discrimination to change voting requirements without approval from the Department of Justice. This book follows the stunning aftermath of that ruling and explains how voter suppression works, from photo ID requirements to gerrymandering to poll closures. It also explores the resistance: the organizing, activism, and court battles to restore the basic right to vote to all Americans.

Complete with a discussion guide, photographs, and information about getting involved with elections in teens’ own community, this is an essential explanation of the history of voting rights—and a call to action for a better future. As the nation gears up for the 2020 presidential election season, now is the time for teens to understand the past and work for change.


Praise For One Person, No Vote (YA edition): How Not All Voters Are Treated Equally…

“. . . [D]ocuments centuries of techniques designed to limit progress in the black community. Although some of the material may be upsetting, this is a book that should absolutely be included in the curriculum.” —School Library Connection, starred review

Carol Anderson is the Charles Howard Candler Professor and Chair of African American Studies at Emory University. She is the author of many books and articles, including Bourgeois Radicals: The NAACP and the Struggle for Colonial Liberation, 1941-1960 and Eyes Off the Prize: The United Nations and the African American Struggle for Human Rights: 1944-1955. She lives in Atlanta, Georgia.
www.professorcarolanderson.org