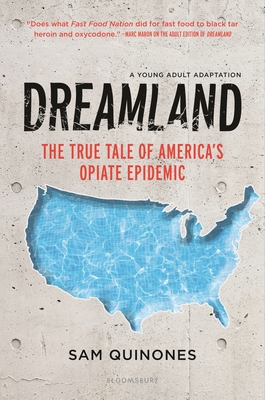 As an adult book, Sam Quinones's Dreamland took the world by storm, winning the NBCC Award for General Nonfiction and hitting at least a dozen Best Book of the Year lists. Now, adapted for the first time for a young adult audience, this compelling reporting explains the roots of the current opiate crisis.

In 1929, in the blue-collar city of Portsmouth, Ohio, a company built a swimming pool the size of a football field; named Dreamland, it became the vital center of the community. Now, addiction has devastated Portsmouth, as it has hundreds of small rural towns and suburbs across America. How that happened is the riveting story of Dreamland. Quinones explains how the rise of the prescription drug OxyContin, a miraculous and extremely addictive painkiller pushed by pharmaceutical companies, paralleled the massive influx of black tar heroin--cheap, potent, and originating from one small county on Mexico's west coast, independent of any drug cartel.

Introducing a memorable cast of characters--pharmaceutical pioneers, young Mexican entrepreneurs, narcotics investigators, survivors, teens, and parents--Dreamland is a revelatory account of the massive threat facing America and its heartland.


Praise For Dreamland (YA edition): The True Tale of America's Opiate Epidemic…

“Does what 'Fast Food Nation' did for fast food to Black Tar Heroin and oxycodone . . . A stunning journalistic journey that follows the history and narrative trajectories that lead to this entirely new style of cultivating drug addiction . . . I just love this book.” —Marc Maron

“Journalist Quinones weaves an extraordinary story, including the personal journeys of the addicted, the drug traffickers, law enforcement, and scores of families affected by the scourge, as he details the social, economic, and political forces that eventually destroyed communities in the American heartland and continues to have a resounding impact.” —Booklist

"This fast-moving and relatively austere account will acquaint teen readers with important elements of the opioid epidemic, though this discussion is only a gateway, if you will, to a deeper story of distress. Yet it ends on a note of quiet hope. Having hit bottom, Portsmouth, Ohio, is turning itself around. “Once a junkie’s haven,” Mr. Quinones writes, it is now a place with a culture of recovery, “a refuge for those seeking a new life.” " - The Wall Street Journal

“You won't find this story told better anywhere else” —Slate

“At once a heartbreaking narrative about the individuals in the grips of addiction, and a thorough history of how that addiction was made possible by a variety of key players. Featuring voices from every corner of the crisis, including pharmaceutical bigwigs, young Mexican drug runners, police, doctors, addicts, survivors, and families touched by epidemic, Dreamland is a must-read for anyone grappling with the story of heroin addiction in the United States.” —Bustle

Sam Quinones is a journalist, storyteller, former LA Times reporter, and author of four acclaimed books of narrative nonfiction, including New York Times bestseller and National Book Critics Circle Award winner Dreamland: The True Tale of America's Opiate Epidemic. "The most original writer on Mexico and the border" (San Francisco Chronicle), he lives with his family in Tennessee.
Loading...
or support indie stores by buying on