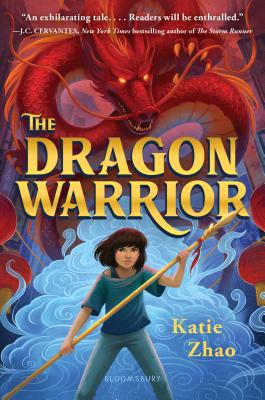 A debut novel inspired by Chinese mythology, this middle-grade fantasy follows an outcast as she embarks on a quest to save the world from demons--perfect for fans of Aru Shah and the End of Time and The Serpent's Secret.

As a member of the Jade Society, twelve-year-old Faryn Liu dreams of honoring her family and the gods by becoming a warrior. But the Society has shunned Faryn and her brother Alex ever since their father disappeared years ago, forcing them to train in secret.

Then, during an errand into San Francisco, Faryn stumbles into a battle with a demon--and helps defeat it. She just might be the fabled Heaven Breaker, a powerful warrior meant to work for the all-mighty deity, the Jade Emperor, by commanding an army of dragons to defeat the demons. That is, if she can prove her worth and find the island of the immortals before the Lunar New Year.

With Alex and other unlikely allies at her side, Faryn sets off on a daring quest across Chinatowns. But becoming the Heaven Breaker will require more sacrifices than she first realized. . . What will Faryn be willing to give up to claim her destiny?


Praise For The Dragon Warrior…

"In this page-turning debut, Zhao weaves an exhilarating tale that shimmers with adventure, love, and loyalty. Readers will be enthralled up to the incredible and absolutely breathless end." - J.C. Cervantes, NEW YORK TIMES bestselling author of THE STORM RUNNER

"With engaging characters, a fast-paced plot, and a skillful blend of modern culture and ancient traditions, this series opener will appeal to fans of Percy Jackson and Aru Shah." - Publishers Weekly

Katie Zhao grew up in Michigan, where there was little for her to do besides bury her nose in a good book or a writing journal. She graduated from the University of Michigan with a BA in English and a minor in political science; she also completed her master's in accounting there. She wrote The Dragon Warrior during her last year of school, in between classes. In her spare time, Katie enjoys reading, singing, dancing (badly), and checking out new restaurants. She now lives in Brooklyn, New York. This is her debut novel.