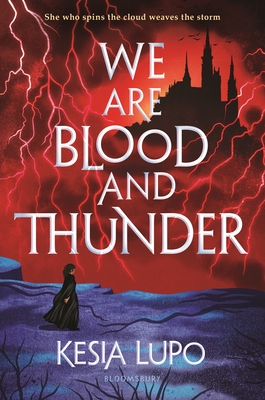 We Are Blood And Thunder

For fans of Furyborn comes a debut YA fantasy following two girls--one on the run, and one returning home--whose magical fates become entwined.

Lena has never left the sealed-off city she calls home. The treacherous storm cloud surrounding the Duke's Forest prevents most from entering or leaving. But then Lena's deepest secret is revealed--she is a mage. And according to the law, all mages must die. With little other choice, she flees for her life, straight into the treacherous forest.

Constance's family and friends believe her to be dead. She fled the Duke's Forest six years before, and no one believed she'd survive outside the city walls. And even though she isn't sure if she can trust anybody back at court, she's intent on reclaiming her place as the duke's daughter and heir.

Lena and Constance meet for only a moment, but even after their paths diverge, the terrifying storm cloud keep them linked. A dark revelation lies at the heart of their connection--the truth behind who cast the storm cloud's spell. Only the girls can expose this secret and dispel the storm for good. . . but unveiling the truth could cost them everything.


Praise For We Are Blood And Thunder…

“Court intrigues and complicated magic systems make We Are Blood and Thunder a tempting first entry into a new fantasy series.” —Foreword Reviews

"A promising tale of magic, mourning, and betrayal, delicately showing how grief can be the most powerful magic of all." - Publishers Weekly online

Kesia Lupo studied history at Oxford University and creative writing at Bath Spa. She lives in Bristol with her husband and works as a children's book editor, writing in the mornings. We Are Blood and Thunder is her first novel.