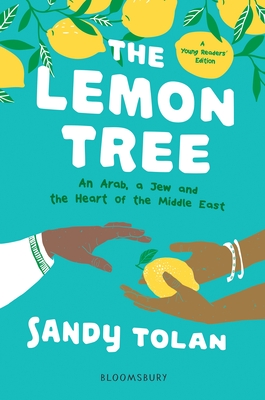 An Arab, A Jew, and the Heart of the Middle East

In 1967, a twenty-five-year-old refugee named Bashir Khairi traveled from the Palestinian hill town of Ramallah to Ramla, Israel, with a goal: to see the beloved stone house with the lemon tree in its backyard that he and his family had been forced to leave nineteen years earlier. When he arrived, he was greeted by one of its new residents: Dalia Eshkenazi Landau, a nineteen-year-old Israeli college student whose family had fled Europe following the Holocaust. She had lived in that house since she was eleven months old.
On the stoop of this shared house, Dalia and Bashir began a surprising friendship, forged in the aftermath of war and later tested as political tensions ran high and Israelis and Palestinians each asserted their own right to live on this land. Adapted from the award-winning adult book and based on Sandy Tolan's extensive research and reporting, The Lemon Tree is a deeply personal story of two people seeking hope, transformation, and home.


Praise For The Lemon Tree (Young Readers' Edition): An Arab, A Jew, and the Heart of the Middle East…

“Through broad sweeps of narrative going back and forward in time, Tolan's sensitively told, eminently fair-minded narrative closes with a return to that lemon tree and its promise of reconciliation. Humane and literate--and rather daring in suggesting that the future of the Middle East need not be violent.” —Kirkus Reviews, starred review

“[Tolan] sensitively describes the tough friendship between Dalia Eshkenazi Landau, the daughter of Romanian Jewish immigrants who settled in Ramla, and Palestinian Bashir Khairi, who in 1967 knocked on her door to look at the house his family lost when it was forced to flee in 1948 . . . Tolan uses the beloved backyard lemon tree to drive home the shared humanity of the successive inhabitants of one home.” —LA Review of Books

“Tolan weaves together dramatically different perceptions of the conflict and its context and explains how the lemon tree grew to become a powerful symbol of home.” —NPR.org

“A balanced presentation of the issues?. . . . puts a very human face on a centuries-old conundrum.” —School Library Connection

"[A] compelling narrative. . . Tolan makes an incredibly complicated topic comprehensible, creating empathy and understanding for people on both sides of the conflict." - School Library Journal