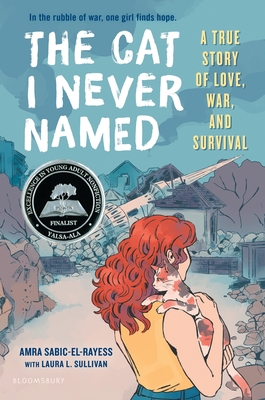 The Cat I Never Named

A True Story of Love, War, and Survival

The stunning memoir of a Muslim teen struggling to survive in the midst of the Bosnian genocide--and the stray cat who protected her family through it all.

In 1992, Amra was a teen in Bihac, Bosnia, when her best friend said they couldn’t speak anymore. Her friend didn’t say why, but Amra knew the reason: Amra was Muslim. It was the first sign her world was changing. Then Muslim refugees from other Bosnian cities started arriving, fleeing Serbian persecution. When the tanks rolled into Bihac, bringing her own city under seige, Amra’s happy life in her peaceful city vanished.
But there is light even in the darkest of times, and she discovered that light in the warm, bonfire eyes of a stray cat. The little calico had followed the refugees into the city and lost her own family. At first, Amra doesn’t want to bother with a stray; her family doesn’t have the money to keep a pet. But with gentle charm this kitty finds her way into everyone’s heart, and after a few near miracles when she seems to save the family, how could they turn her away?
Here is the stunning true story of a teen who, even in the brutality of war, never wavered in her determination to obtain an education, maintain friendships, and even find a first love—and the cat who gave comfort, hope, and maybe even served as the family’s guardian spirit.


Praise For The Cat I Never Named: A True Story of Love, War, and Survival…

“Gripping. . . . Sabic-El-Rayess's visual imagination is a slipstream. Amra's words have a subtle, relentless force, creating a world where life is a danger, a demand, and a warm, calico presence.” —Foreword Reviews (starred review)

"Her prose balances verve and gentleness as she discusses the horrors of war alongside moments of levity. . . . A must-read nonfiction addition." - School Library Journal (starred review)

"Exceptional. . . . The author has an extraordinary ability to recreate both the beauty and brutality of these years." - Booklist (starred review)

"[A] memoir about the transformative power of love, connection, and education. . . . as timely as it is effective." - Publishers Weekly (starred review)

"This fast-paced, touching memoir reminds readers of the significance of the Balkan ethnic war, and places it into a larger conversation about the ways in which ethnically and religiously diverse societies are under threat from extremism and bigotry" - The Horn Book Magazine

Amra Sabic-El-Rayess grew up in Bihac, Bosnia and Herzegovina. Currently she is a professor at Columbia University’s Teachers College working on understanding how and why societies fall apart and what role education can play in rebuilding decimated countries. She is also the author of the critically-acclaimed memoir The Cat I Never Named.
Loading...
or support indie stores by buying on