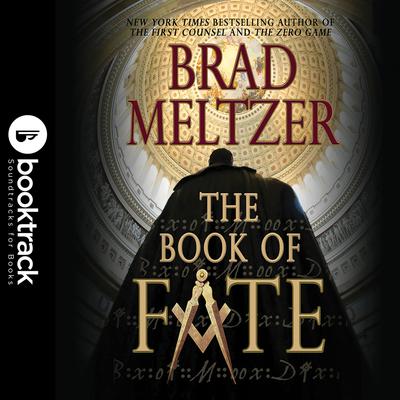 The Book of Fate (Digital Audiobook)

The Book of Fate: Booktrack Edition adds an immersive musical soundtrack to your audiobook listening experience! *
Brad Meltzer's #1 New York Times bestseller featuring a two-hundred-year-old code devised by Thomas Jefferson and a present-day conspiracy at the highest level of power .

So says Wes Holloway, a young presidential aide, about the day he put Ron Boyle, the chief executive's oldest friend, into the president's limousine. By the trip's end, a crazed assassin would permanently disfigure Wes and kill Boyle. Now, eight years later, Boyle has been spotted alive. Trying to figure out what really happened takes Wes back into disturbing secrets buried in Freemason history, a decade-old presidential crossword puzzle, and a two-hundred-year-old code invented by Thomas Jefferson that conceals secrets worth dying for.
*Booktrack is an immersive format that pairs traditional audiobook narration to complementary music. The tempo and rhythm of the score are in perfect harmony with the action and characters throughout the audiobook. Gently playing in the background, the music never overpowers or distracts from the narration, so listeners can enjoy every minute. When you purchase this Booktrack edition, you receive the exact narration as the traditional audiobook available, with the addition of music throughout.

Brad Meltzer is the #1 New York Times bestselling author of The Inner Circle, The Book of Fate, and seven other bestselling thrillers. In addition to his fiction, Brad is one of the only authors to ever have books on the bestseller list for nonfiction (History Decoded), advice (Heroes for My Son and Heroes for My Daughter), children's books (I Am Amelia Earhart and I Am Abraham Lincoln) and even graphic books (Justice League of America). He is also the host of Brad Meltzer's Decoded on the History Channel, and Brad Meltzer's Lost History on H2. He currently lives in Florida. You can find much more about him at BradMeltzer.com. You can also see what he's doing right now at Facebook.com/BradMeltzer and on Twitter @bradmeltzer.