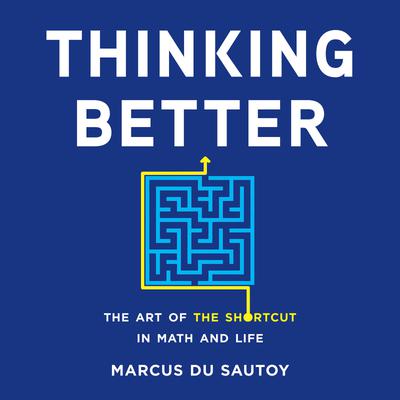 The Art of the Shortcut in Math and Life

One of the world's great mathematicians shows why math is the ultimate timesaver—and how everyone can make their lives easier with a few simple shortcuts.

We are often told that hard work is the key to success. But success isn’t about hard work – it’s about shortcuts. Shortcuts allow us to solve one problem quickly so that we can tackle an even bigger one. They make us capable of doing great things. And according to Marcus du Sautoy, math is the very art of the shortcut.

Thinking Better is a celebration of how math lets us do more with less. Du Sautoy explores how diagramming revolutionized therapy, why calculus is the greatest shortcut ever invented, whether you must really practice for ten thousand hours to become a concert violinist, and why shortcuts give us an advantage over even the most powerful AI. Throughout, we meet artists, scientists, and entrepreneurs who use mathematical shortcuts to change the world.

Delightful, illuminating, and above all practical, Thinking Better is for anyone who has wondered why you should waste time climbing the mountain when you could go around it much faster.

Marcus du Sautoy is the Simonyi professor for the public understanding of science and professor of mathematics at the University of Oxford. He is author of six books and a play I is a Strange Loop (in which he was also lead actor). He has presented numerous radio and TV series including a four-part landmark TV series for the BBC called The Story of Maths. He works extensively with a range of arts organizations bringing science alive for the public from The Royal Opera House to the Glastonbury Festival. du Sautoy is a fellow of the Royal Society, a recipient of the Berwick Prize, the Zeeman Medal, and the Michael Faraday Prize, and received an OBE for services to science. He lives in London.