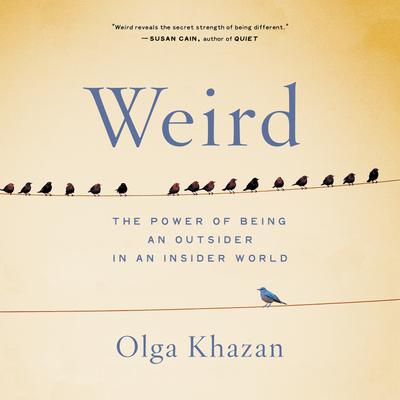 The Power of Being an Outsider in an Insider World

Learn why the concept of "weird" is being reclaimed and turned into a badge of honor, used to show how being different—culturally, socially, physically, or mentally—can be a person's greatest strength.

Most of us have at some point in our lives felt like an outsider, sometimes considering ourselves "too weird" to fit in. Growing up as a Russian immigrant in West Texas, Olga Khazan always felt there was something different about her. This feeling has permeated her life, and as she embarked on a science writing career, she realized there were psychological connections between this feeling of being an outsider and both her struggles and successes later in life. She decided to reach out to other people who were unique in their environments to see if they had experienced similar feelings of alienation, and if so, to learn how they overcame them. Weird is based on in-person interviews with many of these individuals, such as a woman who is professionally surrounded by men, a liberal in a conservative area, and a Muslim in a predominantly Christian town. In addition, it provides actionable insights based on interviews with dozens of experts and a review of hundreds of scientific studies.

Weird explores why it is that we crave conformity, how that affects people who are different, and what they can do about it. First, the book dives into the history of social norms and why some people hew to them more strictly than others. Next, Khazan explores the causes behind-and the consequences of-social rejection. She then reveals the hidden upsides to being "weird," as well as the strategies that people who are different might use in order to achieve success in a society that values normalcy. Finally, the book follows the trajectories of unique individuals who either decided to be among others just like them; to stay weird; or to dwell somewhere in between.

Combining Khazan's own story with those of others and with fascinating takeaways from cutting-edge psychology research, Weird reveals how successful individuals learned to embrace their weirdness, using it to their advantage.

Olga Khazan is an award-winning writer for The Atlantic, covering health, gender, and science. Prior to that, she was The Atlantic's Global Editor. She has also written for the Los Angeles Times, the Washington Post, Forbes, and other publications. She is a two-time recipient of the International Reporting Project's Journalism Fellowship, winner of the 2017 National Headliner Awards for Magazine Online Writing, and host of The Atlantic's online video series, You Are Here: The Incredible Science Behind Everyday Life.