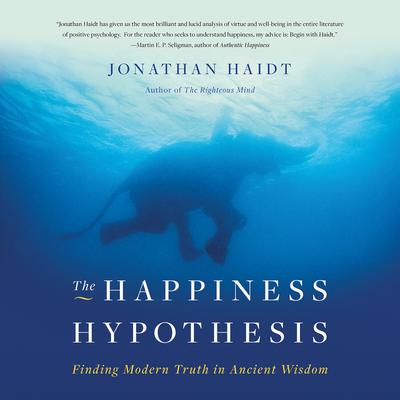 Jonathan Haidt skillfully combines two genres-philosophical wisdom and scientific research-delighting the reader with surprising insights. He explains, for example, why we have such difficulty controlling ourselves and sticking to our plans; why no achievement brings lasting happiness, yet a few changes in your life can have profound effects, and why even confirmed atheists experience spiritual elevation. In a stunning final chapter, Haidt addresses the grand question "How can I live a meaningful life?," offering an original answer that draws on the rich inspiration of both philosophy and science.

"The Happiness Hypothesis is a wonderful and nuanced book that provides deep insight into the some of the most important questions in life -- Why are we here? What kind of life should we lead? What paths lead to happiness? From the ancient philosophers to cutting edge scientists, Haidt weaves a tapestry of the best and the brightest. His highly original work on elevation and awe—two long-neglected emotions—adds a new weave to that tapestry. A truly inspiring book." —David M. Buss, author of The Evolution of Desire: Strategies of Human Mating

"In this beautifully written book, Jonathan Haidt shows us the deep connection that exists between cutting-edge psychological research and the wisdom of the ancients. It is inspiring to see how much modern psychology informs life's most central and persistent questions" —Barry Schwartz, author ofThe Paradox of Choice: Why More Is Less

"In our quest for happiness, we must find a balance between modern science and ancient wisdom, between East and West, and between "left brain" and "right brain." Haidt has struck that balance perfectly, and in doing so has given us the most brilliant and lucid analysis of virtue and well-being in the entire literature of positive psychology. For the reader who seeks to understand happiness, my advice is: Begin with Haidt." —Martin E.P. Seligman, Director, Positive Psychology Center at the University of Pennsylvania and author of Authentic Happiness

"Haidt is a fine guide on this journey between past and present, discussing the current complexities of psychological theory with clarity and humor. . . Haidt's is an open-minded, robust look at philosophy, psychological fact and spiritual mystery, of scientific rationalism and the unknowable ephemeral—an honest inquiry that concludes that the best life is, perhaps, one lived in the balance of opposites." —Bookpage

Jonathan Haidt Jonathan Haidt is the Thomas Cooley Professor of Ethical Leadership at New York University's Stern School of Business. He is a social psychologist whose research examines morality and the moral emotions. He is the author of The Righteous Mind: Why Good People are Divided by Politics and Religion, and the co-author of The Coddling of the American Mind: How Good Intentions and Bad Ideas are Setting Up a Generation for Failure.