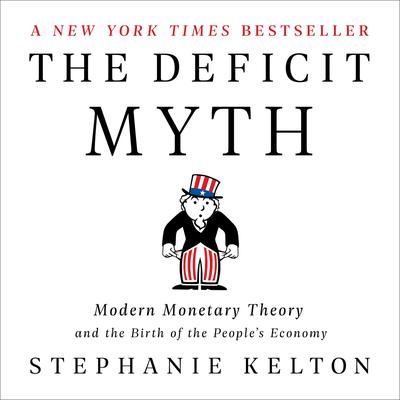 A New York Times Bestseller
The leading thinker and most visible public advocate of modern monetary theory -- the freshest and most important idea about economics in decades -- delivers a radically different, bold, new understanding for how to build a just and prosperous society.
Stephanie Kelton's brilliant exploration of modern monetary theory (MMT) dramatically changes our understanding of how we can best deal with crucial issues ranging from poverty and inequality to creating jobs, expanding health care coverage, climate change, and building resilient infrastructure. Any ambitious proposal, however, inevitably runs into the buzz saw of how to find the money to pay for it, rooted in myths about deficits that are hobbling us as a country.
Kelton busts through the myths that prevent us from taking action: that the federal government should budget like a household, that deficits will harm the next generation, crowd out private investment, and undermine long-term growth, and that entitlements are propelling us toward a grave fiscal crisis.
MMT, as Kelton shows, shifts the terrain from narrow budgetary questions to one of broader economic and social benefits. With its important new ways of understanding money, taxes, and the critical role of deficit spending, MMT redefines how to responsibly use our resources so that we can maximize our potential as a society. MMT gives us the power to imagine a new politics and a new economy and move from a narrative of scarcity to one of opportunity.

Stephanie Kelton, professor of economics and public policy at the State University of New York at Stony Brook and Bloomberg contributing columnist, has been called a "prophetic economist" and a "Rock Star" of progressive economics. Stephanie is the founder and of the top-rated economic blog New Economic Perspectives, and a member of the TopWonks network of the nation's best thinkers. In 2016, Politico recognized her as one of the fifty people across the country most influencing the political debate.

Kelton was chief economist on the U.S. Senate Budget Committee (minority staff) and an advisor to the Bernie2016 presidential campaign. Kelton is a regular commentator on national radio and television and speaks across the world at large gatherings of people interested in global finance, political economy and public policy. She has superb connections in all areas of print and broadcast national media. Her op-eds have appeared in The New York Times, The Washington Post, The Los Angeles Times and Bloomberg.