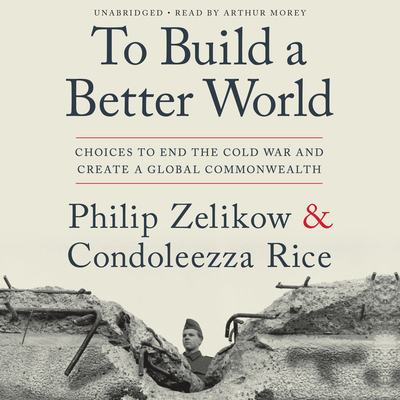 To Build a Better World

Choices to End the Cold War and Create a Global Commonwealth

A deeply researched international history and "exemplary study" (New York Times Book Review) of how a divided world ended and our present world was fashioned, as the world drifts toward another great time of choosing.
Two of America's leading scholar-diplomats, Philip Zelikow and Condoleezza Rice, have combed sources in several languages, interviewed leading figures, and drawn on their own firsthand experience to bring to life the choices that molded the contemporary world. Zeroing in on the key moments of decision, the might-have-beens, and the human beings working through them, they explore both what happened and what could have happened, to show how one world ended and another took form. Beginning in the late 1970s and carrying into the present, they focus on the momentous period between 1988 and 1992, when an entire world system changed, states broke apart, and societies were transformed. Such periods have always been accompanied by terrible wars -- but not this time.

This is also a story of individuals coping with uncertainty. They voice their hopes and fears. They try out desperate improvisations and careful designs. These were leaders who grew up in a "postwar" world, who tried to fashion something better, more peaceful, more prosperous, than the damaged, divided world in which they had come of age. New problems are putting their choices, and the world they made, back on the operating table. It is time to recall not only why they made their choices, but also just how great nations can step up to great challenges.

Timed for the thirtieth anniversary of the fall of the Berlin Wall, To Build a Better World is an authoritative depiction of contemporary statecraft. It lets readers in on the strategies and negotiations, nerve-racking risks, last-minute decisions, and deep deliberations behind the dramas that changed the face of Europe -- and the world -- forever.

Praise For To Build a Better World: Choices to End the Cold War and Create a Global Commonwealth…

PRAISE FOR PHILIP ZELIKOW AND CONDOLEEZZA RICE:
"Zelikow and Rice have drawn on thousands of still-classified documents in the American archives. But their industry has not stopped there: to tell the Soviet and German sides of the story, they consulted the East German and Russian archives and interviewed a host of European leaders. The quality of their writing and the depth of their research ensure that their exemplary study will serve as the starting point for all future work on German foreign policy after the Cold War."
—New York Times Book Review

"An important behind-the-scenes account of how East Germany was folded into West Germany at breakneck speed -- an event that precipitated the demise of the Soviet Union."
—The New Yorker

"For the first time, the inside story -- what the policymakers thought and did behind the scenes -- is recounted by two participants, using interviews and secret documents...[The book] conveys the sweeping changes devised by a handful of leaders and their aides as they sought to capitalize on a rare, momentary acceleration of history. It also captures the candid exchanges among leaders about long-range fundamentals in Europe."
—International Herald Tribune

"Zelikow and Rice's thoughtful and honest assessment, largely avoiding wonkishness, lays a clear through line from the diplomatic successes of the 1980s and '90s to the political environment of today."—Publishers Weekly

Philip Zelikow is the White Burkett Miller Professor of History and J. Wilson Newman Professor of Governance at the Miller Center of Public Affairs, both at the University of Virginia. His books and essays focus on critical episodes in American and world history. A former civil rights attorney and career diplomat, he has also served at all levels of American government. He was the executive director of the 9/11 Commission and, before that, directed the Carter-Ford commission on federal election reform. He has worked on international policy in each of the five administrations from Reagan through Obama.

Condoleezza Rice was the sixty-sixth US secretary of state and the first black woman to hold that office. Prior to that, she was the first woman to serve as national security adviser. She is a professor at Stanford University and cofounder of RiceHadleyGates LLC. Rice is the New York Times bestselling author of No Higher Honor: A Memoir of My Years in Washington (2011), Extraordinary, Ordinary People: A Memoir of Family (2010), Democracy: Stories from the Long Road to Freedom (2017), and Political Risk: How Businesses and Organizations Can Anticipate Global Insecurity (2018).
Loading...
or support indie stores by buying on