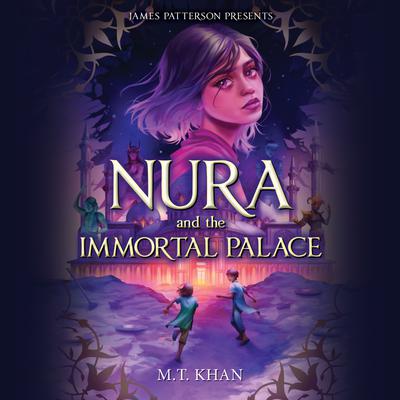 Aru Shah and the End of Time meets Studio Ghibli’s Spirited Away in this mesmerizing portal fantasy that takes readers into the little-known world of Jinn.

Nura longs for the simple pleasure of many things—to wear a beautiful red dupatta or to bite into a sweet gulab. But with her mom hard at work in a run-down sweatshop and three younger siblings to feed, Nura must spend her days earning money by mica mining. But it’s not just the extra rupees in her pocket Nura is after. Local rumor says there’s buried treasure in the mine, and Nura knows that finding it could change the course of her family’s life forever.

Her plan backfires when the mines collapse and four kids, including her best friend, Faisal, are claimed dead. Nura refuses to believe it and shovels her way through the dirt hoping to find him. Instead, she finds herself at the entrance to a strange world of purple skies and pink seas—a portal to the opulent realm of jinn, inhabited by the trickster creatures from her mother’s cautionary tales. Yet they aren’t nearly as treacherous as her mother made them out to be, because Nura is invited to a luxury jinn hotel, where she’s given everything she could ever imagine and more.

But there’s a dark truth lurking beneath all that glitter and gold, and when Nura crosses the owner’s son and is banished to the working quarters, she realizes she isn’t the only human who’s ended up in the hotel’s clutches. Faisal and the other missing children are there, too, and if Nura can’t find a way to help them all escape, they’ll be bound to work for the hotel forever.

Set in a rural industrial town in Pakistan and full of hope, heart, and humor, Nura and the Immortal Palace is inspired by M.T. Khan’s own Pakistani Muslim heritage.
Loading...