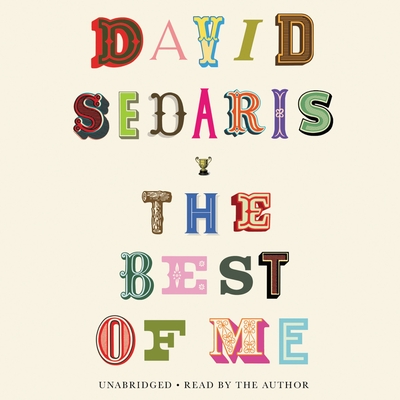 “Genius… It is miraculous to read these pieces… You must read The Best of Me.” —Andrew Sean Greer, New York Times Book Review

David Sedaris’s best stories and essays, spanning his remarkable career—as selected and read by the author himself. Featuring fresh and classic recordings, including a new essay and an interview exclusive to the audiobook.

For more than twenty-five years, David Sedaris has been carving out a unique literary space, virtually creating his own genre. A Sedaris story may seem confessional, but is also highly attuned to the world outside. It opens our eyes to what is at absurd and moving about our daily existence. And it is almost impossible to listen without laughing.

Now, for the first time collected in one volume, the author brings us his funniest and most memorable work. In these stories, Sedaris shops for rare taxidermy, hitchhikes with a lady quadriplegic, and spits a lozenge into a fellow traveler’s lap. He drowns a mouse in a bucket, struggles to say “give it to me” in five languages, and hand-feeds a carnivorous bird.

But if all you expect to find in Sedaris’s work is the deft and sharply observed comedy for which he became renowned, you may be surprised to discover that his words bring more warmth than mockery, more fellow-feeling than derision. Nowhere is this clearer than in his writing about his loved ones. In these essays, Sedaris explores falling in love and staying together, recognizing his own aging not in the mirror but in the faces of his siblings, losing one parent and coming to terms—at long last—with the other.

Taken together, the performances in TheBest of Me reveal the wonder and delight Sedaris takes in the surprises life brings him. No experience, he sees, is quite as he expected—it’s often harder, more fraught, and certainly weirder—but sometimes it is also much richer and more wonderful.

Full of joy, generosity, and the incisive humor that has led David Sedaris to be called “the funniest man alive” (Time Out New York), The Best of Me spans a career spent watching and learning and laughing—quite often at himself—and invites listeners deep into the world of one of the most brilliant and original writers of our time.

The Best of Me AUDIOBOOK TRACK LISTING
Introduction (new recording)

From The New Yorker
Undecided

From Calypso 2019
Now We Are Five
A House Divided
The Perfect Fit
Leviathan
A Modest Proposal
Why Aren’t You Laughing?
The Spirit World


Praise For The Best of Me…

“The genius of The Best of Me is that it reveals the growth of a writer, a sense of how his outlook has changed and where he finds humor… The subject, in many of the pieces Sedaris has selected, is the judgment and pain we inflict on one another, and by ‘we’ Sedaris does not mean people in general. He means him. And he means you. And he means me… You must read The Best of Me. It will be a new experience, knowing that enough time has passed to find humor in the hardest parts of life. More than ever—we’re allowed to laugh.”—Andrew Sean Greer, New York Times Book Review

“An excellent introduction to Sedaris’ work if, somehow, you’re not among the millions who have made him a mainstay on bestseller lists and flocked to his ticketed readings. Even if you’ve read or listened to every word he’s ever written, it’s a terrific highlights reel and a chance to view the arc of Sedaris’ development as a writer over 25 years… In his more serious moments, Sedaris expresses surprise and gratitude for his good fortune. Even his father, “that perpetual human storm cloud,” has finally, in his late 90s, acknowledged his elder son’s fantastic accomplishments. The Best of Me is a well-earned victory lap.” —Heller McAlpin, Christian Science Monitor

“Sedaris fans will gobble up this greatest hits compilation… When you’re craving a good old-fashioned belly laugh, turn to this new retrospective collection of Sedaris’ funniest and most heartwarming essays and fictional stories written over the last 25-plus years.”—Lesley Kennedy, CNN

“The collection magnifies many of the attributes that have made Sedaris such a beloved writer, not least of which is the sense of wit... Across 46 stories and 400 pages, Sedaris’ clarity as a writer comes through. The pieces can be painfully funny and painfully poignant for the same reason: He’s economical with words, thoughts, jokes and emotions.”—Andrew Dansby, Houston Chronicle

“If you’re looking for some comic relief, look no further than David Sedaris.” —Tonya Mosley, NPR

“Longtime fans and astute readers will understand that the title doesn’t refer entirely to the author; he has chosen and arranged works to highlight his funny, often dysfunctional and always loving parents, siblings and partner, Hugh—the people he believes are the best of him.”—Bethanne Patrick, Washington Post

“The Best of Me encompasses a wide swath of his past work, from early entries in The New Yorker’s Shouts & Murmurs section to fan-favorite essays like 2000’s ‘Me Talk Pretty One Day’ (in which he recounts taking French-language classes from a merciless teacher) and 2016’s ‘The Perfect Fit’ (about shopping for outrageous clothes in Tokyo).” —Seija Rankin, Entertainment Weekly

“A generous and rollicking collection… Sedaris is a fun, wickedly funny companion. But for all his playful irreverence… he also brings a sharp moral eye to his subjects—which tend toward the eclectic. Writing about everything from family tragedy to international travel to taxidermied owls, he illuminates the manifold wonders (and weirdness) of everyday life. For those new to Sedaris’s work, this book will serve as a delightful introduction. For longtime fans, it will offer a familiar comfort, like catching up with an old friend.”—Cornelia Channing, Vulture

“Sedaris’s brilliant knack for observational humor is on full display in this terrific retrospective essay collection… Sedaris finds ample fodder for his keen satiric sense in his life and the lives of those around him. Sedaris can take even the most serious subject and evoke both empathy and laughter. He can also be just plain hilarious… This is the perfect introduction for the uninitiated, while Sedaris’s fans will enjoy rediscovering old favorites.”—Publishers Weekly (starred review)

David Sedaris is the author of eleven previous books, including, most recently, The Best of Me, Calypso and Theft by Finding. He is a regular contributor to The New Yorker and BBC Radio 4. In 2019, he was inducted into the American Academy of Arts and Letters. He is the recipient of the Thurber Prize for American Humor, Jonathan Swift International Literature Prize for Satire and Humor, and the Terry Southern Prize for Humor.
Loading...
or support indie stores by buying on