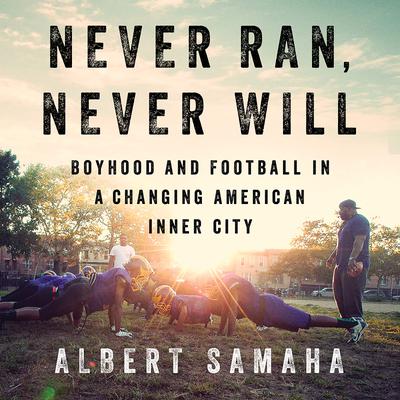 Boyhood and Football in a Changing American Inner City

This uplifting story of a boys' football team shines light on the under-appreciated virtues that can bloom in impoverished neighborhoods, even as nearby communities exclude them from economic progress.

Never Ran, Never Will tells the story of the working-class, mostly black neighborhood of Brownsville, Brooklyn; its proud youth football team, the Mo Better Jaguars; and the young boys who are often at the center of both. Oomz, Gio, Hart, and their charismatic, vulnerable friends, come together on a dusty football field. All around them their community is threatened by violence, poverty, and the specter of losing their homes to gentrification. Their passionate, unpaid coaches teach hard lessons about surviving American life with little help from the outside world, cultivating in their players the perseverance and courage to make it.

Football isn't everybody's ideal way to find the American dream, but for some kids it's the surest road there is. The Mo Better Jaguars team offers a refuge from the gang feuding that consumes much of the streets and a ticket to a better future in a country where football talent remains an exceptionally valuable commodity. If the team can make the regional championships, prestigious high schools and colleges might open their doors to the players.

Never Ran, Never Will is a complex, humane story that reveals the changing world of an American inner city and a group of unforgettable boys in the middle of it all.

Albert Samaha is a criminal justice reporter at BuzzFeed. He has worked at The Village Voice, San Francisco Weekly, the San Francisco Examiner, and the New York Observer. His stories have won awards from the National Association of Black Journalists, the Association of Alternative Newsmedia, and others. He is a graduate of Columbia's Graduate School of Journalism and lives in New York City.