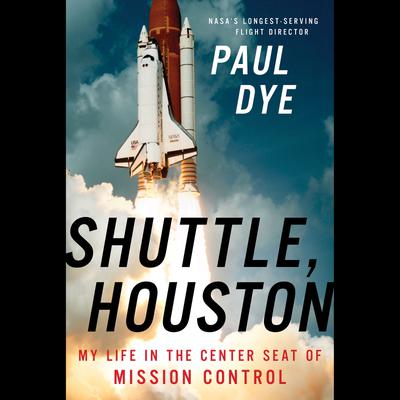 My Life in the Center Seat of Mission Control

From the longest-serving Flight Director in NASA's history comes a revealing account of high-stakes Mission Control work and the Space Shuttle program that has redefined our relationship with the universe.

A compelling look inside the Space Shuttle missions that helped lay the groundwork for the Space Age, Shuttle, Houston explores the determined personalities, technological miracles, and eleventh-hour saves that have given us human spaceflight.
Relaying stories of missions (and their grueling training) in vivid detail, Paul Dye, NASA's longest-serving Flight Director, examines the split-second decisions that the directors and astronauts were forced to make in a field where mistakes are unthinkable, and where errors led to the loss of national resources -- and more importantly one's crew. Dye's stories from the heart of Mission Control explain the mysteries of flying the Shuttle -- from the powerful fiery ascent to the majesty of on-orbit operations to the high-speed and critical re-entry and landing of a hundred-ton glider.
The Space Shuttles flew 135 missions. Astronauts conducted space walks, captured satellites, and docked with the Mir Space Station, bringing space into our everyday life, from GPS to satellite TV. Shuttle, Houston puts readers in his own seat at Mission Control, the hub that made humanity's leap into a new frontier possible.

Paul Dye has more than forty years of aviation experience as an engineer, builder, and pilot. He earned his degree in Aeronautical Engineering with a specialization in aircraft design and flight testing from the University of Minnesota in 1982. He retired from NASA in 2013 as the longest-serving Flight Director in U.S. history, having been involved in thirty-nine missions, nine of those as the lead Flight Director. He has received a NASA Outstanding Leadership Medal, a NASA Exceptional Service Medal (three times), and a Presidential Medal. Dye is now a leadership consultant and speaker, as well as the former Editor-in-Chief (currently Editor-at-Large) of Kitplanes magazine.