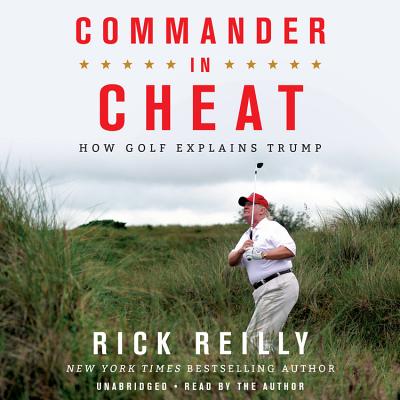 NEW YORK TIMES BESTSELLER
"Reilly pokes more holes in Trump's claims than there are sand traps on all of his courses combined. It is by turns amusing and alarming." -- The New Yorker
"Golf is the spine of this shocking, wildly humorous book, but humanity is its flesh and spirit." -- Chicago Sun-Times
"Every one of Trump's most disgusting qualities surfaces in golf." -- The Ringer
An outrageous indictment of Donald Trump's appalling behavior when it comes to golf -- on and off the green -- and what it reveals about his character.
Donald Trump loves golf. He loves to play it, buy it, build it, and operate it. He owns 14 courses around the world and runs another five, all of which he insists are the best on the planet. He also claims he's a 3 handicap, almost never loses, and has won an astonishing 18 club championships.
How much of all that is true? Almost none of it, acclaimed sportswriter Rick Reilly reveals in this unsparing look at Trump in the world of golf.
Based on Reilly's own experiences with Trump as well as interviews with over 100 golf pros, amateurs, developers, and caddies, Commander in Cheat is a startling and at times hilarious indictment of Trump and his golf game. You'll learn how Trump cheats (sometimes with the help of his caddies and Secret Service agents), lies about his scores (the "Trump Bump"), tells whoppers about the rank of his courses and their worth (declaring that every one of them is worth $50 million), and tramples the etiquette of the game (driving on greens doesn't help). Trump doesn't brag so much, though, about the golf contractors he stiffs, the course neighbors he intimidates, or the way his golf decisions wind up infecting his political ones.
For Trump, it's always about winning. To do it, he uses the tricks he picked up from the hustlers at the public course where he learned the game as a college kid, and then polished as one of the most bombastic businessmen of our time. As Reilly writes, "Golf is like bicycle shorts. It reveals a lot about a man." Commander in Cheat "paints a side-splitting portrait of a congenital cheater" (Esquire), revealing all kinds of unsightly truths Trump has been hiding.

Currently a screenwriter and author, Rick Reilly for years wrote for Sports Illustrated and appeared on and wrote for ESPN. In addition to being voted the NSMA National Sportswriter of the Year eleven times, he has also been recognized with the Damon Runyon Award for Outstanding Contributions to Journalism. USA Today called him, "the closest thing sportswriting ever had to a rock star."

Praise For Commander in Cheat: How Golf Explains Trump…

"Golf is the spine of this shocking, wildly humorous
book, but humanity is its flesh and spirit....It's all hilarious in Reilly's
gifted hands."—Chicago Sun-Times


"The American sportswriting great has written my favorite
sports book of 2019...By turns hilarious and shocking. In a game that prides
itself on gentlemanly conduct, Trump is exposed by numerous witnesses (most of
whom are surprisingly happy to go on the record, a tribute to Reilly's
reporting skills) as a first-class cheat....I thought my opinion of the 45th
president could not get any lower. I was wrong."—The Times (London), Sports Book of the Year

"Relying on testimony
from playing partners, caddies, and former Trump employees, Reilly pokes more
holes in Trump's claims than there are sand traps on all of his courses
combined. It is by turns amusing and alarming....P.G. Wodehouse would have approved."—The New Yorker


"Building on his firsthand experience by interviewing scores of
golf pros, caddies, and opponents, Reilly paints a side-splitting portrait of a
congenital cheater."—Esquire, Most Anticipated Books of the Year


"Reilly uses golf to reveal larger truths. Or, in this
case, lies."
—The Arizona Republic


"Diamonds among the divots - [one of] the best golf books ever written....It was not exactly a secret that Trump plays fast and loose with the rules, but Reilly's catalogue of his moral failures takes the breath away....Hilarious and rather alarming stuff."—The Times (UK)


"Great writing...If you really don't like Trump,
this is your perfect book."—Chris Matthews, MSNBC's Hardball


"Sportswriting can be
a lens into any part of our culture, and [Commander in Cheat] proves my
point... a clever way to make sense of White House chaos."—The Week, Books to Read in 2019

"There's a new tell-all
book about the president...The specific anecdotes are where Commander in Cheat
really takes off."—Stephen Colbert, The Late Show

"Commander in Cheat
is one of the most surprising pieces of muckraking of the Trump era....Reilly's
right to say Trump sees a golf course like he does the Oval Office...Every one of
Trump's most disgusting qualities surfaces in golf."—The Ringer


"The latest anti-Trump exposé isn't about Russia collusion, his taxes or his tweets. It's about his favorite pastime....Delve[s] into allegations the president isn't always honest out on the course."—Fox News


"An eye-watering account of the president's abuse of the rules of golf....[an] unrelenting hatchet job."
—The Times (London)


"Renowned sports
columnist Reilly...has known the president for 30 years...If Reilly was once a Trump favorite, he no longer will be...[An] amusing, entertaining assessment of a congenital
liar."—Kirkus Reviews


"A hilarious and well-researched indictment of President Trump and his golf game....Mr. Reilly, probably the most acclaimed sports writer of his generation, details and highlights in incredulous and often times comical fashion...'The Donald,' both before and after he became the nation's 45th president."—Pittsburgh Post-Gazette


"Brilliant...Very, very funny when it comes to the
details of what Donald Trump does....[Commander
in Cheat
is] the great Father's Day Book."—Laurence O'Donnell, MSNBC's The Last Word


"[Commander in Cheat] is filled with vivid allegations about Trump's
cheating -- how he once threw broadcaster Mike Tirico's ball off the
green during a round, how he manipulates the value of his courses to get
tax breaks, how he exaggerates his golf scores."—The Washington Post


"A must-read for Democrats and Republicans alike."
—DelcoTimes