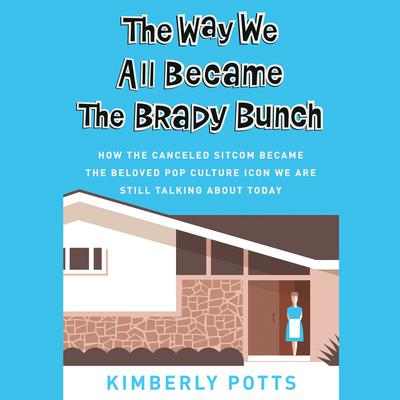 The Way We All Became The Brady Bunch (Digital Audiobook)

In celebration of the Brady Bunch's 50th anniversary, TV writer Kimberly Potts writes a Seinfeldia-like definitive history of the show that changed the family sitcom and made an indelible impact on pop culture.

There isn't a person in this country who hasn't heard of The Brady Bunch. Whether it's the show they watched growing up, or the one their parents did--whether adored, or great to poke fun at--The Brady Bunch is unarguably one of the most enduring and inspiring TV shows of our time. It's lived a dozen lives, from its original comedy debut and big-screen movies, to the Emmy-winning TV auteurs it has inspired--everyone from Vince Gilligan to Seth MacFarlane--and promises to live many more.

Kimberly Potts is a television and pop culture writer with a prolific career spanning more than 20 years, with features written for The Hollywood Reporter, Vulture, TV Guide, Esquire.com, Los Angeles Times, The Wrap, and so on.

She currently covers the number one sitcom on TV, The Big Bang Theory, for Vulture.com, and recently spent several seasons covering the number one cable drama on TV, The Walking Dead, for Yahoo TV. She's written oral histories of Deadwood and Breaking Bad, think pieces defending the polarizing series finales of Seinfeld and The Sopranos, and created weekly beat coverage, features, interviews, and recaps of TV comedies, dramas, and reality series, including Orange Is the New Black, Bates Motel, Gilmore Girls, Better Call Saul, The Americans, Gossip Girl, and Dancing with the Stars.