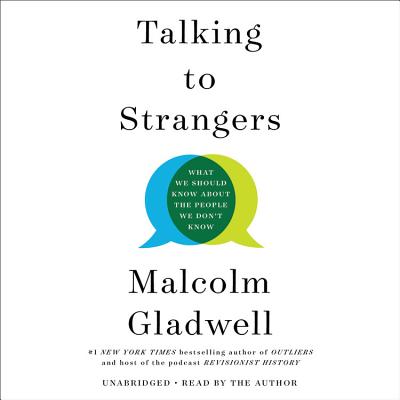 What We Should Know about the People We Don't Know

A Best Book of the Year: The Financial Times, Bloomberg, Chicago Tribune, and Detroit Free Pres
Malcolm Gladwell, host of the podcast Revisionist History and author of the #1 New York Times bestseller Outliers, offers a powerful examination of our interactions with strangers -- and why they often go wrong.
How did Fidel Castro fool the CIA for a generation? Why did Neville Chamberlain think he could trust Adolf Hitler? Why are campus sexual assaults on the rise? Do television sitcoms teach us something about the way we relate to each other that isn't true?
While tackling these questions, Malcolm Gladwell was not solely writing a book for the page. He was also producing for the ear. In the audiobook version of Talking to Strangers, you'll hear the voices of people he interviewed--scientists, criminologists, military psychologists. Court transcripts are brought to life with re-enactments. You actually hear the contentious arrest of Sandra Bland by the side of the road in Texas. As Gladwell revisits the deceptions of Bernie Madoff, the trial of Amanda Knox, and the suicide of Sylvia Plath, you hear directly from many of the players in these real-life tragedies. There's even a theme song - Janelle Monae's "Hell You Talmbout."
Something is very wrong, Gladwell argues, with the tools and strategies we use to make sense of people we don't know. And because we don't know how to talk to strangers, we are inviting conflict and misunderstanding in ways that have a profound effect on our lives and our world.

Praise For Talking to Strangers: What We Should Know about the People We Don't Know…

"Talking to Strangers is a must-read...I love this book... Reading it will actually change not just how you see strangers, but how you look at yourself, the news--the world...Reading this book changed me."—Oprah Winfrey, O, The Oprah Magazine

"Powerful advice on truly getting to
know others...Gladwell brilliantly argues that
we should stop assuming, realize no one's transparent and understand that
behavior is tied to unseen circumstances."—People, Book of the Week

"Gladwell has again delivered
a compelling, conversation-starting read...At a time when the world feels intractably
polarized, a book examining the varying ways we misinterpret or fail to
communicate with one another could not feel more necessary...With a mix of
reporting, research and a deft narrative hand, Gladwell illuminates these
examples with the page-turning urgency of a paperback thriller."—Chris Barton, Los Angeles Times

"Mr. Gladwell's towering success rests on the moment when the skeptic starts to think that maybe we're wrong about everything and maybe, just maybe, this Gladwell guy is onto something...Talking to Strangers is weightier than his previous titles."—Amy Chozick, New York Times

"Gladwell uses compelling real-world examples to show the how and why behind our interactions with folks we're trying to understand."
—Rhett Power, Forbes

"Gladwell's case studies are thrilling...Chock-full
of gripping anecdotes from the recent and forgotten past. He uses these
riveting stories to offer up bite-size observations about how we engage with
strangers."—Maggie Taft, Booklist

"Both fascinating and topical...A thoughtful treatise...Gladwell writes in his signature colorful, fluid, and accessible prose."—Publishers Weekly

"Gladwell interviews brilliant people, generates powerful
insights, writes like an angel, and has earned a massive and admiring audience.
He has a keen eye and a witty flair and he's one of the best observationalists
of a generation. Gladwell is a big-picture thinker who helps us make sense of
the human condition."—Bob Brisco, WebMD Magazine

"As always, with his narrative gift and eye for the telling detail,
Gladwell peppers his work with unforgettable facts... He has immense gifts--a
probing, original, questioning mind, an ability to dig up information others
haven't considered and tie it to a broader point. He has a narrative skill
nonpareil."—Stephen Galloway, Hollywood Reporter

"Engaging...Mr. Gladwell [presents] a mountain of quirky anecdotes and
interesting research about our blunders with strangers, and why we make
them...It's fascinating to peek at these incidents through Mr. Gladwell's
psychological lens."—Leigh Anne Focareta, Pittsburgh Post-Gazette

"Inspiring and motivating...Gladwell is a wunderkind and a saint...He takes on racial division, incompatible perspectives, and emotional dissonance
without ever sounding preaching or proud. The stories make you think."—John Brandon, Daily Beast

Malcolm Gladwell is the author of five New York Times bestsellers--The Tipping Point, Blink,Outliers, What the Dog Saw, and David and Goliath. He is also the co-founder of Pushkin Industries, an audio content company that produces the podcasts Revisionist History, which reconsiders things both overlooked and misunderstood, and Broken Record, where he, Rick Rubin, and Bruce Headlam interview musicians across a wide range of genres. Gladwell has been included in the TIME 100 Most Influential People list and touted as one of Foreign Policy's Top Global Thinkers.
Loading...
or support indie stores by buying on
(This book is on backorder)