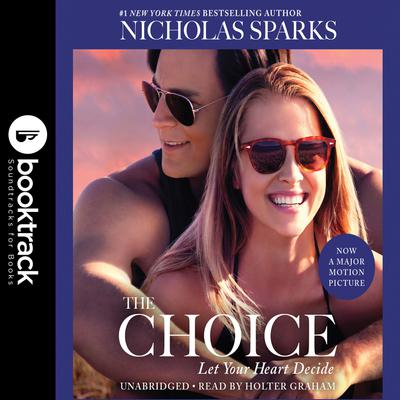 The Choice: Booktrack Edition adds an immersive musical soundtrack to your audiobook listening experience! *
In this deeply moving #1 New York Times bestseller, Nicholas Sparks turns his unrivaled talents to a tale about love found and lost, and the choices we hope we'll never have to make.

Travis Parker has everything a man could want: a good job, loyal friends, even a waterfront home in small-town North Carolina. In full pursuit of the good life - boating, swimming , and regular barbecues with his good-natured buddies -- he holds the vague conviction that a serious relationship with a woman would only cramp his style. That is, until Gabby Holland moves in next door.

Spanning the eventful years of young love, marriage and family, THE CHOICE ultimately confronts us with the most heart-wrenching question of all: how far would you go to keep the hope of love alive?
*Booktrack is an immersive format that pairs traditional audiobook narration to complementary music. The tempo and rhythm of the score are in perfect harmony with the action and characters throughout the audiobook. Gently playing in the background, the music never overpowers or distracts from the narration, so listeners can enjoy every minute. When you purchase this Booktrack edition, you receive the exact narration as the traditional audiobook available, with the addition of music throughout.