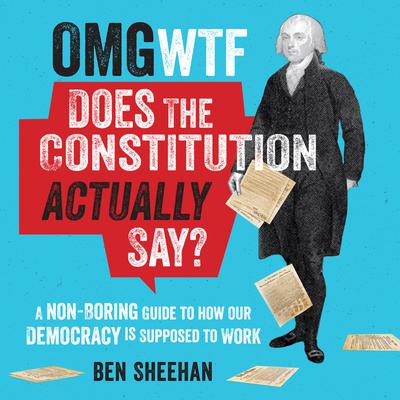 Do you know what the Constitution ACTUALLY says?
This witty and highly relevant annotation of our founding document is the go-to guide to the ins and outs of how our government really works.
Written by political savant and entertainment veteran, Ben Sheehan, and vetted for accuracy by dozens of experts in the field of constitutional law, OMG WTF Does the Constitution Actually Say? is an entertaining and accessible guide that explains what the Constitution lays out.
Packed with digestible notes and clear infographics on everything from the meaning of the Second Amendment to the stated rules around Supreme Court nominations, Sheehan walks us through the entire Constitution, from its preamble to its final amendment. He also offers a bonus section on the Declaration of Independence. Extra-credit information throughout on things like amendments that were never passed and what powers elected officials actually have, give readers all the information they need to be informed and effective voters and citizens.

Ben Sheehan is a former award-winning executive producer at Funny Or Die. He founded OMG WTF (Ohio, Michigan, Georgia, Wisconsin, Texas, Florida) to teach voters about state executive races during the 2018 midterms. The Hollywood Reporter listed him as one of entertainment's 35 Rising Executives Under 35 and OMG WTF's Gerrymander Jewelry was a finalist for Fast Company's World Changing Ideas 2019. In 2016, he helped register 50,000 voters through digital videos as the executive director of Save the Day. The projects he's been involved with have received over a billion views.

Arielle Yuspeh is a political consultant based in Los Angeles. A former creative director at the intersection of film and social impact, she transitioned into politics where she ran congressional races and field operations (including those in key swing states for presidential campaigns). In addition to having served on the boards of several non-profits, Arielle currently works as a political strategist specializing in policy issues and ballot initiative campaigns. She co-created Gerrymander Jewelry to highlight the absurdity of how many states draw their congressional and state legislative district lines.