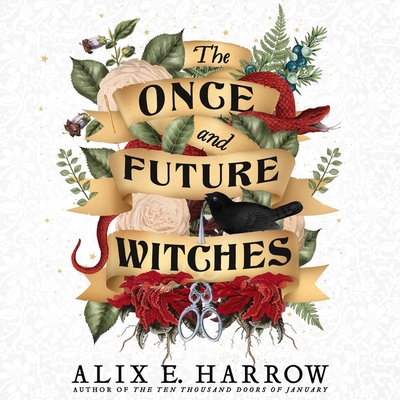 The Once and Future Witches

“Alix Harrow’s The Ten Thousand Doors of January was my favorite book last year, so I had incredibly high expectations when I picked up The Once and Future Witches. This book is very different, but I adore it just as much! Set in the late 1800s in a world with a slightly alternate history from ours, women are fighting for the vote and losing. Three wayward sisters decide to challenge the patriarchy by bringing back witchcraft. Told through familiar stories twisted in new ways, this book is incredible. You will not be able to put it down, from the beautifully written introduction to the pulse-pounding ending!”
— Carrie Deming, The Dog Eared Book, Palmyra, NY
View the List

“Exhilarating and punchy, blurring the line of fantasy and reality. Great characters, a thoughtful take on history, and the clever use of classic fairy tales and nursery rhymes informing both spell and story.”
— Tomoko Bason, BookPeople, Austin, TX
View the List

In the late 1800s, three sisters use witchcraft to change the course of history in Alix E. Harrow's powerful novel of magic and the suffragette movement.

In 1893, there's no such thing as witches. There used to be, in the wild, dark days before the burnings began, but now witching is nothing but tidy charms and nursery rhymes. If the modern woman wants any measure of power, she must find it at the ballot box.

But when the Eastwood sisters -- James Juniper, Agnes Amaranth, and Beatrice Belladonna -- join the suffragists of New Salem, they begin to pursue the forgotten words and ways that might turn the women's movement into the witch's movement. Stalked by shadows and sickness, hunted by forces who will not suffer a witch to vote -- and perhaps not even to live -- the sisters will need to delve into the oldest magics, draw new alliances, and heal the bond between them if they want to survive.

There's no such thing as witches. But there will be.

For more from Alix E. Harrow, check out The Ten Thousand Doors of January.