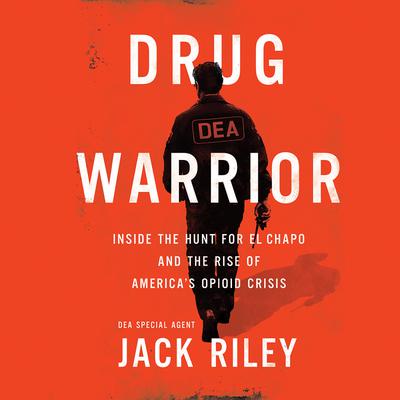 DEA Agent Jack Riley, "[Chicago's] most famous federal agent since the days of The Untouchables" (-Rolling Stone)tells the inside story of his 30-year hunt for the drug kingpin known as El Chapo, and reveals the true causes of the American opioid epidemic.

Jack Riley, grandson of a Chicago cop known for using his fists, was born to be a drug warrior. Joaquín "El Chapo" Guzmán Loera, who farmed marijuana and opium poppies as a teenager in Mexico, was born to be a drug lord. Their worlds collided when Riley, a career special agent with the Drug Enforcement Administration, was promoted to lead the fight against Chapo on the border at El Paso.

Drug Warrior is the story of Riley's decades-long hunt for the world's most wanted drug lord, set against the rise of modern international drug trafficking, and America's spiraling opioid epidemic. Jack Riley started his career as an undercover street agent in Chicago busting small-time dealers. By the time he worked his way up to second in command of the DEA-a post few field agents ever reach-he had overseen every major mission to capture foreign drug kingpins since the 1990s, and had witnessed first-hand how El Chapo changed the game. As brilliant as he was lethal, Chapo not only decimated his competition, he foresaw Americans' dependence on opioids and heroin, and manipulated supply to increase demand. Riley's story culminates as he and the DEA win their greatest victory-the capture and extradition of his long-time nemesis-and Chapo faces his darkest fear: U.S. justice.

A riveting memoir of life inside the drug wars, and a never-before-seen glimpse of the inner-workings of the DEA, Drug Warrior is a critical examination of how America's opioid crisis came to be, and the extraordinary people fighting it.

John "Jack" Riley served as Special Agent in Charge (SAC) of DEA's El Paso Field Division, then was selected by the Deputy Attorney General to serve as the first Director of the Organized Crime Drug Enforcement Task Force. From 2010-2014 he served as SAC of the Chicago Field Division, combating Mexican drug trafficking organizations and drug-related gang violence plaguing Chicago. Jack served as DEA's Chief of Operations beginning in September 2014, commanding the organizations global drug enforcement efforts in 227 domestic and 86 foreign offices. He was appointed DEA's Acting Deputy Administrator (COO) in April 2015, overseeing all intelligence and regulatory activities worldwide. He is the highest ranking career Special Agent at the DEA.

Command Sergeant Major (retired) Eric L. Haney served in the United States Army as a Combat Infantryman, as a Ranger, and ultimately, as a founding member and eight-year veteran of the Army's clandestine counter-terrorist arm, Delta Force. Eric has also worked extensively with the both the CIA and DEA on operations against Narco-terrorists in Latin America and Southeast Asia. He was instrumental in the establishment and training of the FBI's Hostage Rescue Team. Haney is a regular contributor to CNN, FOX, and CBS. He is the New York Times bestselling author of Inside Delta Force, Beyond Shock and Awe, No Man's Land, and Low Country. Haney was co-executive producer and writer of the hit television series The Unit, based on Inside Delta Force.

Eric and his wife, Dianna, reside in the historic Wesley Connor Home in Cave Spring, Georgia.