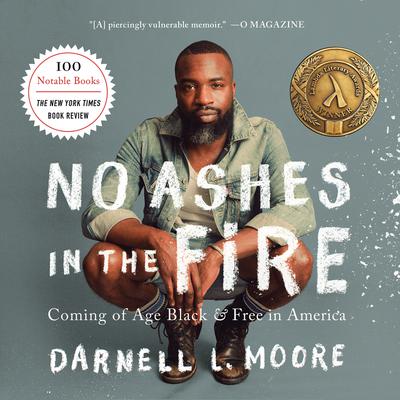 No Ashes in the Fire (Digital Audiobook)

Coming of Age Black and Free in America

From a leading journalist and activist comes a brave, beautifully wrought memoir.

When Darnell Moore was fourteen, three boys from his neighborhood tried to set him on fire. They cornered him while he was walking home from school, harassed him because they thought he was gay, and poured a jug of gasoline on him. He escaped, but just barely. It wasn't the last time he would face death.

Three decades later, Moore is an award-winning writer, a leading Black Lives Matter activist, and an advocate for justice and liberation. In No Ashes in the Fire, he shares the journey taken by that scared, bullied teenager who not only survived, but found his calling. Moore's transcendence over the myriad forces of repression that faced him is a testament to the grace and care of the people who loved him, and to his hometown, Camden, NJ, scarred and ignored but brimming with life. Moore reminds us that liberation is possible if we commit ourselves to fighting for it, and if we dream and create futures where those who survive on society's edges can thrive.

No Ashes in the Fire is a story of beauty and hope-and an honest reckoning with family, with place, and with what it means to be free.

Darnell L. Moore is an editor-at-large at Interactive One, a columnist at LogoTV.com and NewNextNow.com, and a contributor at Mic, where he founded their widely viewed digital series The Movement. He writes regularly for Ebony, Advocate, Vice, and Guardian. Moore was one of the original Black Lives Matter organizers, organizing bus trips from New York to Ferguson after the murder of Michael Brown. Moore is a writer-in-residence at the Center of African American Religion, Sexual Politics, and Social Justice at Columbia University, has taught at NYU, Rutgers, Fordham, and Vassar, and was trained at Princeton Theological Seminary. In 2016, he was named one of The Root 100, and in 2015 he was named one of Ebony magazine's Power 100 and Planned Parenthood's 99 Dream Keepers. He divides his time between Brooklyn and Atlanta.