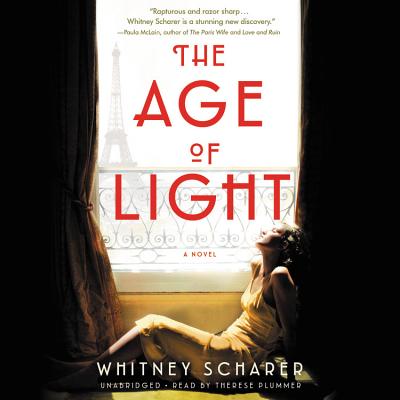 The Age of Light (CD-Audio)

Whitney Scharer earned her MFA in Creative Writing from the University of Washington, and her short fiction has appeared in the Bellevue Literary Review, Cimarron Review, and other journals. She's received an Emerging Artist Award in Literature from the St. Botolph Club Foundation, a Somerville Arts Council Artists grant, and been awarded a residency at the Virginia Center for the Creative Arts. The Age of Light is her first novel.

"Scharer's debut is a rivetingly sexy snapshot of the duo's real-life relationship as it morphs from apprenticeship to partnership to tumultuous love affair."
—Kim Hubbard, People

"Like Paris in the 1930s, Sharer's first novel is a radiant clash of romance and reality"
—O, the Oprah Magazine

"She joins such novelists as Paula McLain ("The Paris Wife") and Rupert Thomson ("Never Anyone but You") in a most worthy enterprise: repopulating male-dominated accounts of the past with the many noteworthy women who deserve the same limelight."
—Donna Rikfind, Washington Post

"Scharer...skillfully renders an electric version of the city, pulling the reader into the opulence and mystery of the era."
—Annabel Gutterman, Time

"Is "woman behaves dangerously, lives wildly" a genre? If so, The Age of Light is its latest poster child. The novel is work of historical fiction about Lee Miller, a Vogue model who became one of the first female war correspondents. In Scharer's plot, Miller travels to Paris where she meets photographer Man Ray, who becomes her collaborator and lover. While most stories about Miller paint her as Ray's muse, this one portrays her as the independent and daring artist she truly was."
—Glamour

Scharer's debut is both engrossing and cinematic, a must for readers who enjoy a fictional peek into the lives of real-life artists.
—Library Journal

"Scharer sets her viewfinder selectively, focusing on her heroine's insecurities as much as her accomplishments as an artist; her hunger to be more than "a neck to hold pearls, a slim waist to show off a belt" is contrasted with her habit of solving problems by simply leaving. The price for Lee is steep, but it makes for irresistible reading. Sexy and moving."
—Kirkus, starred review

"Scharer's intoxicating first novel...bring[s] a stunning chiaroscuro effect to the saga of a woman transforming herself into an artist."
—Booklist, starred review

"Whitney Scharer's storytelling is utterly immersive and gorgeous in its details, transporting you into Lee Miller's life, and her struggles to be taken seriously in a man's world. This is a powerful, sensual and gripping portrait of the forging of an artist's soul."
—Madeline Miller, #1 New York Times bestselling author of Circe and Song of Achilles

"An extraordinary young woman discovers love and art and betrayal among the artists of 1930s Paris and documents the horrors of war through her singular camera lens. An uplifting, heartbreaking and altogether immersive read."
—Helen Simonson, New York Times bestselling author of The Summer Before the War and Major Pettigrew's

"The Age of Light is a bold, intimate and gorgeous novel-at once a vivid romp through the salons and parties of the Paris art world in the 1930s and a breathtaking close up of a woman battling to be both muse and artist, lover and collaborator, and above all, herself. This is a relevant, utterly enthralling debut from a talented writer who understands the complex intersection of ambition and femininity. I was swept off my feet."—Jessica Shattuck, New York Times bestselling author of The Woman in the Castle and The Hazards of Go

"Scharer's scrupulous research and dazzling prose fuse to create a captivating portrait of the little-known - but now unforgettable - Lee Miller, whose exceptional beauty, bold conviction, and rare talent disrupted the male-centric art scene of 1920's Paris."
—Georgia Hunter, New York Times bestselling author of We Were the Lucky Ones
or support indie stores by buying on
Copyright © 2020 American Booksellers Association