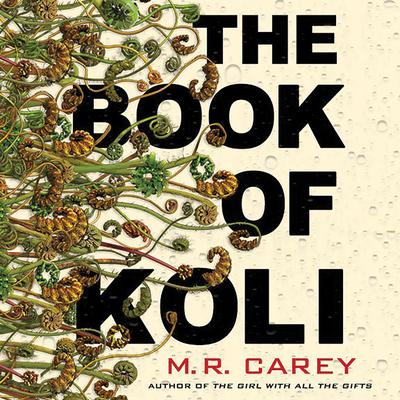 The Book of Koli (The Rampart Trilogy) (Digital Audiobook)

"A captivating start to what promises to be an epic post-apocalyptic fable" (Kirkus), The Book of Koli is the unforgettable story of a young boy struggling to find his place in a world where nature itself has turned against humanity.
Everything that lives hates us...
Beyond the walls of the small village of Mythen Rood lies an unrecognizable landscape. A place where overgrown forests are filled with choker trees and deadly seeds that will kill you where you stand. And if they don't get you, one of the dangerous shunned men will.
Koli has lived in Mythen Rood his entire life. He believes the first rule of survival is that you don't venture too far beyond the walls.
He's wrong.

For more from M. R. Carey, check out:The Girl With All the GiftsFellsideThe Boy on the BridgeSomeone Like Me

By the same author, writing as Mike Carey:
The Devil You Know
Vicious Circle
Dead Men's Boots
Thicker Than Water
The Naming of the Beasts

M. R. Carey has been making up stories for most of his life. His novel The Girl With All the Gifts was a USA Today bestseller and is a major motion picture based on his BAFTA-nominated screenplay. Under the name Mike Carey he has written for both DC and Marvel, including critically acclaimed runs on X-Men and Fantastic Four, Marvel's flagship superhero titles. His creator-owned books regularly appear in the New York Times bestseller list. He also has several previous novels, two radio plays, and a number of TV and movie screenplays to his credit.