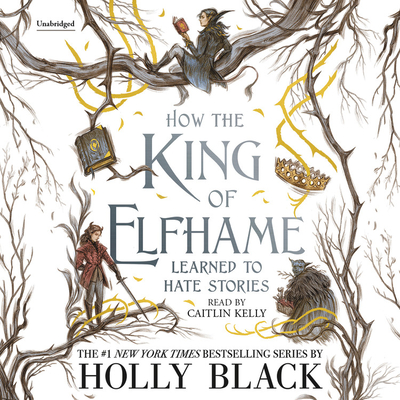 Return to the captivating world of Elfhame with this illustrated addition to the New York Times bestselling Folk of Air trilogy that began with The Cruel Prince, from award-winning author Holly Black.
Once upon a time, there was a boy with a wicked tongue.

Before he was a cruel prince or a wicked king, he was a faerie child with a heart of stone. #1 New York Times bestselling author, Holly Black reveals a deeper look into the dramatic life of Elfhame's enigmatic high king, Cardan. This tale includes delicious details of life before The Cruel Prince, an adventure beyond The Queen of Nothing, and familiar moments from The Folk of the Air trilogy, told wholly from Cardan's perspective.

This new installment in the Folk of the Air series is a return to the heart-racing romance, danger, humor, and drama that enchanted readers everywhere. Each chapter is paired with lavish and luminous full-color art, making this the perfect collector's item to be enjoyed by both new audiences and old.

Praise for How The King of Elfhame Learned to Hate Stories:
"Offers new delights along with familiar moments retold...fans will rejoice in every dark, luscious moment."—Kirkus

Praise for The Queen of Nothing:
*"Whether you came for the lore or the love, perfection."
—Kirkus, starred review

*"A compelling final piece in a powerful set."—Booklist, starred review

"We're being promised a 'jaw-dropping' finale...Based on the ride she's taken readers on so far, we'd expect nothing less."—Entertainment Weekly

Praise for The Wicked King:
*"A stunning and compelling sequel."—SLJ, starred review

*"A heady blend of courtly double-crossing, Faerie lore, and toxic attraction swirls together in the sequel to THE CRUEL PRINCE.... Black's writing is both contemporary and classic; her world is, at this point, intensely well-realized, so that some plot twists seem almost inevitable."—Kirkus, starred review

*"A rare second volume that surpasses the first, with, happily, more intrigue and passion still to come."—Booklist, starred review

Praise for The Darkest Part of the Forest:
A Kids' Indie Next List Book of the Year

*"Black returns here to the dark faerie realm that spurred her initial
success, and if anything, she's only gotten better, writing with an
elegant, economical precision and wringing searing emotional resonance
from the simplest of sentences."
—The Bulletin, starred review

*"Black returns to the realm of faerie for her latest novel, and the results, as any of her fans would expect, are terrific."—VOYA, starred review

"This edgy, dark fantasy will be a hit with young adults who like their
magical creatures to live in a recognizably contemporary world."—Library Media Connection

"Like a true fairy tale, Black's story weds blinding romance and dark
terrors, but her worthy heroes are up to the challenge of both."—The Horn Book

"It's an enjoyable read with well-developed characters and genuine chills..."
—Publishers Weekly

Holly Black is the #1 New York Times bestselling author of over thirty fantasy novels for kids and teens. She has been a finalist for an Eisner and a Lodestar Award, and the recipient of the Mythopoeic Award, a Nebula, and a Newbery Honor. Her books have been translated into thirty-two languages worldwide and adapted for film. She currently lives in New England with her husband and son in a house with a secret library. Her website is www.blackholly.com.
Loading...
or support indie stores by buying on