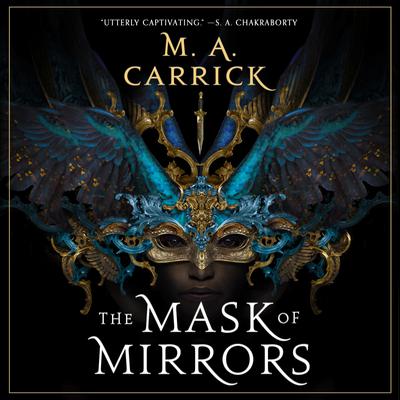 Ren is a liar and a thief, a pattern-reader and a daughter of no clan. Raised in the slums of Nadežra, she fled that world to save her sister. Now, she has returned with one goal: to trick her way into a noble house, securing her fortune and her sister’s future.

But in the city of dreams, her masquerade is just one of many. Enigmatic crime lord Derossi Vargo, stony captain of the guard Grey Serrado, dashing heir Leato Traementis, and the legendary vigilante known as the Rook all have secrets that could unravel her own.

And as corrupt nightmare magic begins to weave its way through the city of dreams, the poisonous feuds of its aristocrats and the shadowy dangers of its impoverished underbelly become tangled—with Ren at their heart.

"Lush, engrossing, and full of mystery and dark magic" (BookPage), The Mask of Mirrors is the unmissable start to the Rook & Rose trilogy, a dazzling fantasy adventure by Marie Brennan and Alyc Helms, writing together as M. A. Carrick.

Praise for the Rook & Rose trilogy:

"For those who like their revenge plots served with the intrigue of The Goblin Emperor, the colonial conflict of The City of Brass, the panache of Swordspoint, and the richly detailed settings of Guy Gavriel Kay."—Booklist (starred review)

"Utterly captivating." —S. A. Chakraborty, author of The City of Brass

"This novel will catch hold of your dreams and keep you from sleeping." —Mary Robinette Kowal, author of The Calculating Stars

"Wonderfully immersive—I was unable to put it down." —Andrea Stewart, author of The Bone Shard Daughter

M. A. Carrick is the joint pen name of Marie Brennan (author of the Memoirs of Lady Trent) and Alyc Helms (author of the Adventures of Mr. Mystic). The two met in 2000 on an archaeological dig in Wales and Ireland -- including a stint in the town of Carrickmacross -- and have built their friendship through two decades of anthropology, writing, and gaming. They live in the San Francisco Bay Area.