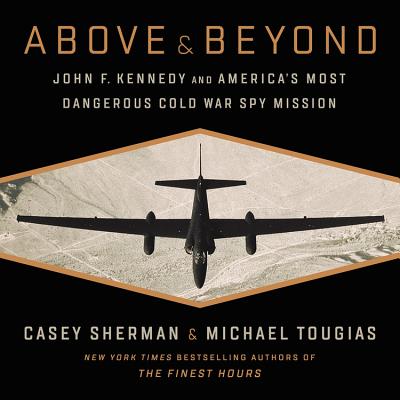 Above and Beyond Lib/E

From the authors of the bestselling The Finest Hours, the riveting, deeply human story of President John F. Kennedy and two U-2 pilots, Rudy Anderson and Chuck Maultsby, who risked their lives to save America during the Cuban Missile Crisis. During an infamous thirteen-day stretch of October 1962, America faced the prospect of imminent nuclear war with the Soviet Union. Two things saved humanity: the strategic wisdom of John F. Kennedy, and the U-2 aerial spy program.Above and Beyond tells the story of the Cuban Missile Crisis through the eyes of three characters: Kennedy, and two U-2 pilots, Rudy Anderson and Charles Maultsby, who found themselves in the crosshairs of history, on the worst and most intense day of the crisis.Anderson, a decorated combat pilot, embarked on a top-secret mission from McCoy Air Force Base, Florida, to fly his U-2 spy plane over Cuba to photograph evidence that five Soviet R-2 missile sites are up and running.At the same time, thousands of miles away in Alaska, Maultsby climbed into his own U-2 spy plane and took off on what was believed to be a routine mission to the North Pole to gather radioactive air samples from a recent Russian nuclear test. But just after 12 PM, Maultsby suddenly became disoriented and steered his plane into Soviet airspace. In the White House, Kennedy, strained from back pain, sleeplessness, and days impossible tension, was briefed about Maultsby and his missing U-2. If detected by the Soviets, its presence in Soviet air space could be considered an act of war. But as the president and his advisers wrestled with this information, more bad news came: another U-2 had gone missing--this time over Cuba.Above and Beyond is a deeply researched, gripping account of the lives of these three men, war heroes all, who were brought together during a day that could have changed history.