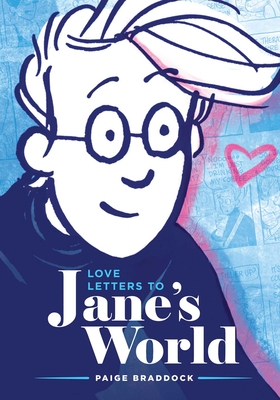 This essential Jane's World collection debuts twenty years after Jane Wyatt first appeared in Paige Braddock's trailblazing comic strip about a young lesbian woman making her clumsy way in the world and the friends who help (or hinder) her along the journey. The Eisner-nominated Jane's World was the first syndicated comic strip with a lesbian main character to appear in many major newspaper markets. This new volume collects the most quintessentially "Jane" storylines from the strip's early, middle, and later years, and pairs them with "love letters" and notes of appreciation from notable fans.

Paige Braddock is the creator of Jane’s World, which was nominated for an Eisner award in 2006 for Best Humor Book, and is currently the Creative Director at Charles M. Schulz Creative Associates, where she oversees the visual and editorial direction for all Schulz licensed properties. She’s illustrated several Peanuts children’s books, and designed the Snoopy U.S. postage stamp that was issued in 2001. She is also the author of the graphic novel series Stinky Cecil, published by Andrews McMeel Publishing, and the co-creator of the science fiction graphic novel series The Martian Confederacy, with writer Jason McNamara. Her romance novels for Bold Strokes Books are written under the pen name Missouri Vaun, and her Jane’s World prose novel, The Case of the Mail Order Bride, was published by Bold Strokes Books in 2006.
Loading...
or
Not Currently Available for Direct Purchase