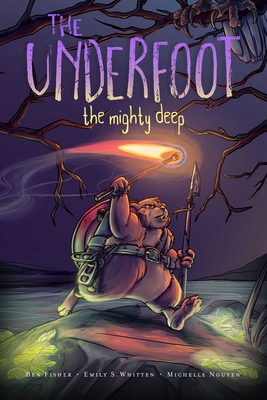 It has been untold years since the Giants-That-Were disappeared, leaving behind the animals forever changed by their strange science. Now, granted the gifts of intelligence and self-awareness, the valiant Hamster Aquatic Mercenaries struggle to keep their horde alive in the dangerous new world.

In The Underfoot: The Mighty Deep, H.A.M. has been hired to save their badger allies from dangerous flooding, but first they’ll need new recruits. Only the best of the best can join the ranks of H.A.M., and the colony’s most ambitious young hamster pups compete for their chance at glory and prestige. Those who succeed, however, soon discover that life outside their burrow is not the grand adventure they imagined, but instead find a world of deadly threats and conflicting stories about their species’ origins.

Combining heroic battles, dark mysteries, and heartfelt friendships, The Underfoot: The Mighty Deep is the beginning of an epic sci-fi trilogy chronicling the animal kingdoms left to rise and fall in the absence of the Giants-That-Were. When the hamsters learn the truth about their past, will they find the strength to overcome the forces aligning against them, or will their tiny horde be wiped from the earth?

Ben is the award-winning author of various comics and short stories, including the critically-acclaimed The Great Divide and the best-selling Misadventures of Grumpy Cat and Pokey. He currently resides in Portland, Oregon with his cat and an increasingly unwieldy collection of board games. When things get too quiet, he records music under the name Tesla Deathray Survivors Anonymous.

Emily S. Whitten is an attorney, comics and fiction writer, pop culture journalist and program host, TV and audio media personality, and convention organizer. Since writing The Underfoot, she also delights in traveling all over the country as a guest at pop culture conventions, to meet fans and talk about the series. Emily resides in the greater D.C. area, and in her copious spare time, she enjoys crafting, reading, exploring the great outdoors, and looking after her tiny hamster.
or support indie stores by buying on
Copyright © 2020 American Booksellers Association