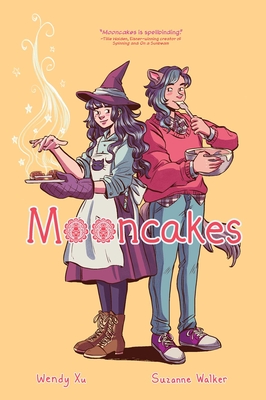 
A story of love and demons, family and witchcraft. Nova Huang knows more about magic than your average teen witch. She works at her grandmothers’ bookshop, where she helps them loan out spell books and investigate any supernatural occurrences in their New England town. One fateful night, she follows reports of a white wolf into the woods, and she comes across the unexpected: her childhood crush, Tam Lang, battling a horse demon in the woods. As a werewolf, Tam has been wandering from place to place for years, unable to call any townhome. Pursued by dark forces eager to claim the magic of wolves and out of options, Tam turns to Nova for help. Their latent feelings are rekindled against the backdrop of witchcraft, untested magic, occult rituals, and family ties both new and old in this enchanting tale of self-discovery.

Suzanne Walker is a Chicago-based writer and editor. Her academic work has been published in Classical World and Barriers and Belonging. She has spoken widely on topics ranging from disability representation in sci-fi/fantasy to applying the themes of science fiction to everyday political activism. Wendy Xu is a Brooklyn-based illustrator and comics artist. Her work has been featured in Here We Are: Feminism for the Real World, Shattered: The Asian American Comics Anthology and as part of the New York Historical Society's Chinese in America exhibit.

Wendy Xu is a Brooklyn-based illustrator and comics artist with three upcoming graphic novels from Harper Collins. She is the co-creator of "Mooncakes", a young adult fantasy graphic novel published in 2019 from Lion Forge Comics, and part of it can be read on mooncakescomic.tumblr.com. Her work has been featured on Catapult, Barnes & Noble Sci-fi/Fantasy Blog, and Tor.com, among other places. You can find more art on her instagram: @artofwendyxu or on twitter: @angrygirLcomics
or support indie stores by buying on
Copyright © 2020 American Booksellers Association