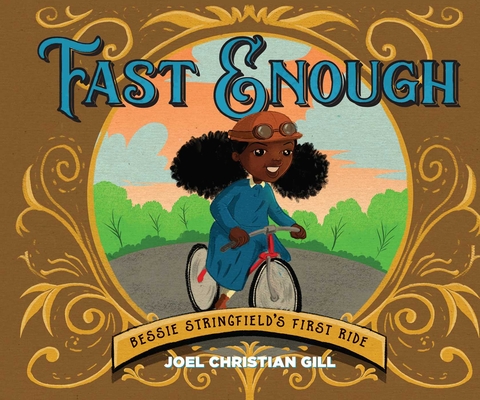 Bessie dreams of riding her bike with the boys after school, but they tell her she is not fast enough. When she finally gets a chance to race, she proves not only that she is fast enough, but she is faster. Fast Enough combines an imagined story of Bessie Stringfield as a young girl with historical facts about Bessie as an adult. Bessie Stringfield went on to become the first African-American woman to travel solo across the United States on a motorcycle. Not only was she fast, but she was a true adventurer, daring to ride to places unsafe for African Americans in the 1930s and ’40s. Fast Enough is an inspirational story for anyone who’s been told they are not enough.

Joel Christian Gill is the chairman, CEO, president, director of development, majority and minority stockholder, manager, co-manager, regional manager, assistant to the regional manager, receptionist, senior black correspondent and janitor of his Strange Fruit Comics. He is the author of Fast Enough: Bessie Stringfield’s First Ride from Lion Forge and the award winning graphic novels Strange Fruit: Uncelebrated Narratives from Black History and Tales of The Talented Tenth from Fulcrum Publishing. In his free time he is Chair of Comic Arts at the New Hampshire Institute of Art where inspire students to unleash the transformational potential of their stories. Founder of #28daysarenotenough it is his belief that segregating the history of minority peoples lessens the impact these people have made on American society, and culture. Gill has dedicated his life to using stories to rebuild, empathy, compassion and ultimately humanity. As his friends and family say, “He won't shut up about equality, justice and the importance of telling stories, so listen to him so we can binge watch Stranger Things in peace.” He received his MFA from Boston University and BA from Roanoke College.
Loading...
or support indie stores by buying on
(This book is on backorder)