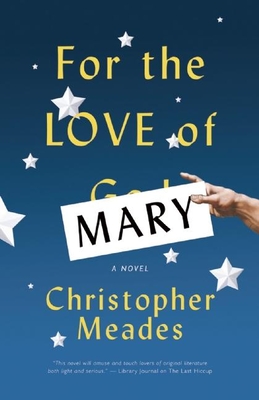 For the Love of Mary (Paperback)

A hilarious coming-of-age novel about the pain of young love, family secrets, and sick ferrets

Fifteen-year-old Jacob feels almost on the inside: almost smart, almost funny, almost good-looking, almost worthy of falling in love. His sister is too busy dating guys in Whitesnake jackets to notice, and his best friend is occupied with his own painful pubescent crisis. Jacob's mother has just started a curious (and rather un-Christian) holy war with the church across the street, while his father has secretly moved into the garage. Everything changes when Jacob meets Mary. Jacob thinks Mary is the most beautiful girl in the world. If only Mary's father wasn't the minister at the enormous rival church. If only she wasn't dating a youth pastor with pristine white teeth and impeccably trimmed hair. If only Jacob could work up the courage to tell Mary how he feels . . . As the conflict between the churches escalates, a peeping Tom prowls the neighbourhood, a bearded lady terrorizes unsuspecting Dairy Queen customers, a beautiful young girl entices Jacob into a carnal romp in a car wash, and the church parishioners prepare their annual re-enactment of Operation Desert Storm. Sidesplitting satire with a surprising amount of heart.

Christopher Meades's novel The Last Hiccup won the 2013 Canadian Authors Association National Award for Fiction. His first novel was The Three Fates of Henrik Nordmark, and his stories have been featured in dozens of journals including The Fiddlehead and The Dalhousie Review. He lives in Vancouver, where his two young daughters treat him like a trampoline. One day he hopes to escape his cubicle and live by the beach.
or
Not Currently Available for Direct Purchase
Copyright © 2020 American Booksellers Association