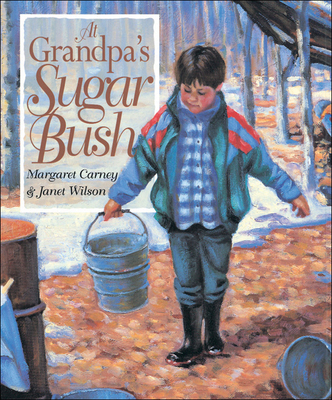 Alongside his grandpa, a young boy shares the tasks involved in making maple syrup the old-fashioned way. From tapping the trees to boiling the sap, the two spend many hours working side by side in the woods. Their reward is a delicious breakfast of pancakes and ?the best syrup in the whole world.?

This is more than a story about syrup-making. It is the story of the grandfather's bond with nature and how he transfers this feeling to his grandson. Janet Wilson's rich oil paintings capture all the signs of spring's arrival in the sugar bush and the loving relationship between the boy and his grandpa.

Margaret Carney shares her deep love of nature through weekly newspaper columns as well as her books for children, which include At Grandpa's Sugar Bush and The Biggest Fish in the Lake. She wrote Where Does a Tiger-Heron Spend the Night? with the hope of turning young children into birders before they can read. She lives in Whitby, Ontario.

Janet Wilson is a prolific and award-winning children's book illustrator. Her books include Jasper's Day and The Biggest Fish in the Lake. She lives in Eden Mills, Ontario, with her husband, Chris.


Praise For At Grandpa's Sugar Bush…

Even in the fairly monochromatic late winter bush, Janet has carefully introduced bursts of color to make her illustrations come alive. The gently told tale and realistic oils both combine to highlight the love, caring and tradition that are evident throughout this family's winter work.—North Halton Compass
or
Not Currently Available for Direct Purchase
Copyright © 2020 American Booksellers Association