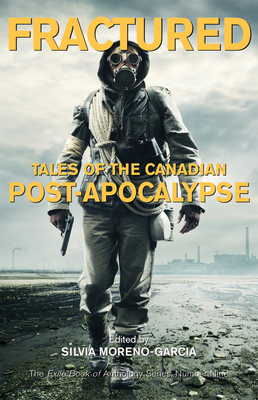 Tales of the Canadian Post-Apocalypse; The Exile Book of Anthology Series, Number Nine

We like to imagine the end. How we might survive. How we might live after the fateful moment that changes everything. That moment has arrived—welcome to Canada, after the apocalypse! Fractured is a collection of stories by more than 20 writers who imagine life after the end of days. The waters have risen around Vancouver, nuclear disasters have devastated the Prairies, a strange sickness has relocated the capital of the nation to Yellowknife, aliens have invaded Manitoba, and even ghosts have returned to exterminate the living. Across this vast nation, a country fractured and rent asunder by disasters both natural and unnatural, come the stories of survivors, of the brave and the wicked, the kind and the hostile. These are tales that reveal the secrets at this critical point for humanity, exploring a diversity of scenarios and settings from small rural communities to large cities and protagonists from all walks of life. Postapocalyptic literature finds its stories in each generation that has something new to reflect upon: Mary Shelley’s 1826 novel The Last Man is considered the first work of modern apocalyptic fiction, and many have followed in her footsteps in both print, with The Hunger Games, I Am Legend, The Road, and OryxandCrake, and film, with Mad Max, Waterworld, The Book of Eli, and others. Contributors to this volume include T. S. Bazelli, David Huebert, Hilary Janzen, Arun Jiwa, Claude Lalumière, Michael Pack, Morgan M. Page, Miriam Oudin, Frank Westcott, A. C. Wise, and more.

Silvia Moreno-Garcia is a short story writer and editor, and the operator of the micropress Innsmouth Free Press. Her short stories have appeared in Imaginarium 2012: The Best Canadian Speculative Writing, The Book of Cthulhu, ELQ/Exile: The Literary Quarterly, and Shine: An Anthology of Optimistic Science Fiction. She is the author of This Strange Way of Dying and the editor of Dead North: Canadian Zombie Fiction and Future Lovecraft. She lives in Vancouver.
Loading...
or
Not Currently Available for Direct Purchase