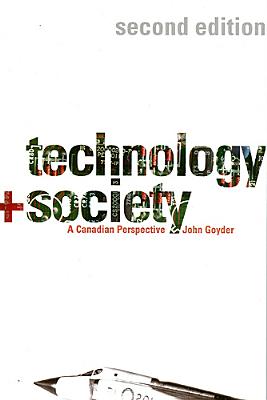 Since the publication of the first edition of Technology and Society: A Canadian Perspective in 1997, awareness of the pervasive effects of new and emerging technologies on our lives is, if anything, even more pronounced. New and emerging technologies in everything from health care to communication and the Internet hold enormous promise. However, the more ominous consequences of technology are also very much with us, from environmental degradation to uncertainty in the workplace in a post dot.com economy to terrorism and warfare.

Technology and Society, Second Edition, continues the rich tradition of Canadian writing on technology found in the work of Harold Innis, Marshall McLuhan, George Grant, Ursula Franklin, and others. Like the first edition, the book begins and ends with an attempt to understand Grant's insistence that technology is a fate, connected, in the anthropological sense, with the evolution of societies. In between, the book examines the social and historical foundation for the development and diffusion of technology in the Canadian context. The first three chapters define the phenomenon of technology by classifying the vast array of tools and techniques. They offer a conceptual scheme for understanding the interrelationship between society and technology and for the diffusion of technologies. Subsequent chapters shift to looking at the consequences of technology. The linkage between technology and economic development is explored, as is the significance of a technocratic value system. The relationship between work and technology-the significance of automation, of a branch plant economy, R&D, and communication-is examined. The final chapters consider new leading technologies such as artificial intelligence and biotechnology, as well as public attitudes towards technology.