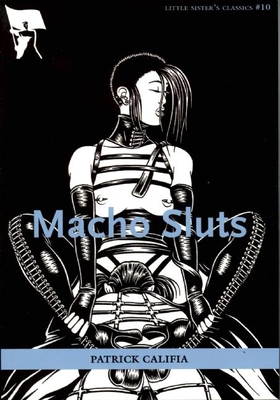 When it was first published in 1988, Patrick Califia's Macho Sluts, a collection of S/M stories set in San Francisco's dyke bathhouses, sex parties, and S/M gay bars, shocked the lesbian community and caused an upheaval in the field of queer publishing. Nobody had ever written so frankly about the kinky potential of woman-to-woman sex (and nobody has ever done it any better). If any book is responsible for the formation of the modern lesbian leather community, this one is it.

Despite its graceful language, imaginative scenarios, and abundant humor, the lesbian press trashed Macho Sluts, and it became a focal point for the infamous legal battles between Canada Customs and Little Sister's, the gay and lesbian bookstore. But readers loved it, and to this day Macho Sluts remains a vital and moving classic that still has the power to educate, radicalize, and expand our notions of the body's potential to provide us with pleasure, pain, and love.

This new edition, part of Arsenal Pulp Press' Little Sister's Classics series resurrecting classics of LGBT literature, includes a new afterword by the author, and an introduction by Wendy Chapkis, a professor of sociology and women and gender studies at the University of Southern Maine in Portland.

Patrick Califia has written many books about radical sex, queer communities, and the repression of desire. Almost ten years ago, Califia transitioned from female to male; he now lives as a bisexual transman in San Francisco.

Patrick Califia's writing and activism have revolutionized the concept of queer sex. He has written over a dozen books, including Coming to Power, Melting Point, No Mercy, and Speaking Sex to Power; his work has been translated into six other languages. He lives in San Francisco. Wendy Chapkis is a Professor of Sociology and Women & Gender Studies at the University of Southern Maine in Portland. She is also the co-author of Dying to Get High: Marijuana as Medicine (New York University Press, 2008).
Loading...
or
Not Currently Available for Direct Purchase