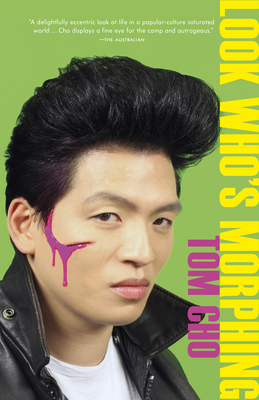 First published to acclaim in Australia, Look Who's Morphing by Asian Australian writer Tom Cho is a funny, fantastical, often outlandish collection of stories firmly grounded in popular culture. Often with his family, the book's central character undergoes a series of startling physical transformations, shape-shifting through figures drawn from film and television, music and books, porn flicks and comics. He is Godzilla, a Muppet, a gay white male stud, and Whitney Houston's bodyguard; the Fonz, a robot, the von Trapp family's caretaker, a Ford Bronco 4x4--and in the book's lavish climax, a one-hundred-foot-tall guitar-wielding rock star performing for an adoring troupe of fans in Tokyo.

Throughout the stories, there is a pervasive questioning of the nature of identity, whether cultural, racial, sexual, gender, or all of the above, and the way it is constructed in a world filled with the white noise of pop culture. Look Who's Morphing is a stylish, highly entertaining literary debut in which nothing--not even one's body--can be taken for granted.

Tom Cho is a trans writer who began writing fiction in his mid teens in Australia, where he was influenced by the YA series Sweet Valley High. His stories have appeared in publications in Australia and elsewhere, and he has performed at events and festivals around the world, including in the award-winning show Hello Kitty, which combines literature with power ballads. Look Who's Morphing is his first book.

Tom Cho: Tom Cho is a writer, performer, and arts organizer. Look Who's Morphing was first released in Australia and New Zealand by Giramondo Publishing in 2009; widely praised, it was shortlisted for the 2010 Commonwealth Writers' Prize for Best First Book, 2009 Age Fiction Book of the Year and Melbourne Prize Trust's 2009 Best Writing Award. He is currently working on immigrating to North America.
Loading...
or support indie stores by buying on