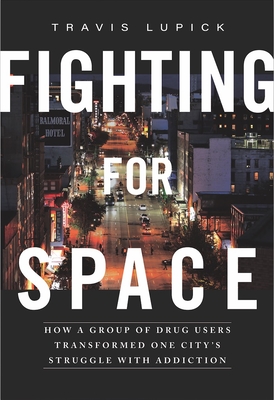 North America is in the grips of a drug epidemic; with the introduction of fentanyl, the chances of a fatal overdose are greater than ever, prompting many to rethink the war on drugs. Public opinion has slowly begun to turn against prohibition, and policy-makers are finally beginning to look at addiction as a health issue as opposed to one for the criminal justice system. While deaths across the continent continue to climb, Fighting for Space explains the concept of harm reduction as a crucial component of a city's response to the drug crisis. It tells the story of a grassroots group of addicts in Vancouver's Downtown Eastside who waged a political street fight for two decades to transform how the city treats its most marginalized citizens. Over the past twenty-five years, this group of residents from Canada's poorest neighborhood organized themselves in response to the growing number of overdose deaths and demanded that addicts be given the same rights as any other citizen; against all odds, they eventually won. But just as their battle came to an end, fentanyl arrived and opioid deaths across North America reached an all-time high. The genocide in Vancouver finally sparked government action. Twenty years later, as the same pattern plays out in other cities, there is much that advocates for reform can learn from Vancouver's experience. Fighting for Space tells that story--including case studies in Ohio, Florida, New York, California, Massachusetts, and Washington state--with the same passionate fervor as the activists whose tireless work gave dignity to addicts and saved countless lives.

Travis Lupick is an award-winning journalist based in Vancouver's Downtown Eastside. He has more than a decade's experience working as a staff reporter for the Georgia Straight newspaper and has also written about drug addiction, harm reduction, and mental health for the Toronto Star, The Walrus, and Al Jazeera English, among other outlets. For his reporting on Canada's opioid crisis, Lupick received the Canadian Association of Journalists' Don McGillivray Award for best overall investigative report of 2016. He has also worked as a journalist in Sierra Leone, Liberia, Malawi, Nepal, Bhutan, Peru, and Honduras
Loading...
or support indie stores by buying on
(This book is on backorder)