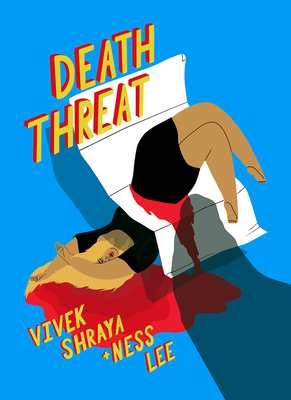 In the fall of 2017, the acclaimed writer and musician Vivek Shraya began receiving vivid and disturbing transphobic hate mail from a stranger. Acclaimed artist Ness Lee brings these letters and Shraya's responses to them to startling life in Death Threat, a comic book that, by its existence, becomes a compelling act of resistance. Using satire and surrealism, Death Threat is an unflinching portrayal of violent harassment from the perspective of both the perpetrator and the target, illustrating the dangers of online accessibility, and the ease with which vitriolic hatred can be spread digitally.

Vivek Shraya is an artist whose body of work includes several albums, films, and books. Her first book of poetry, even this page is white, won a 2017 Publisher Triangle Award and was longlisted for CBC's Canada Reads. She is one half of the music duo Too Attached and the founder of the publishing imprint VS. Books. A four-time Lambda Literary Award finalist, Vivek was a 2016 Pride Toronto Grand Marshal, and has received honours from the Toronto Arts Foundation and the Writers' Trust of Canada. Vivek is currently a director on the board of the Tegan & Sara Foundation and an Assistant Professor of Creative Writing at the University of Calgary. Ness Lee is an illustrator/artist based in Toronto. Her Illustrations have been chosen for award publications such as American Illustration 35 and The Society of Illustrators 57 and she has exhibited her works at galleries in Toronto, New York, Boston and Tokyo. She graduated from the Ontario College of Art and Design with a Bachelors of Design degree in Illustration. She has continued to explore her practice using a wide range of mediums such as ceramics, drawing, painting, and mixed media sculpture.
Loading...
or support indie stores by buying on