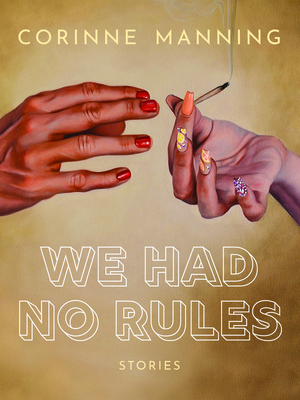 We Had No Rules

A young teenager stays a step ahead of her parents' sexuality-based restrictions by running away and learns a very different set of rules. A woman grieves the loss of a sister, a "gay divorce," and the pain of unacknowledged abuse with the help of a lone wallaby on a farm in Washington State. A professor of women's and gender studies revels in academic and sexual power but risks losing custody of the family dog.
In Corinne Manning's stunning debut story collection, a cast of queer characters explore the choice of assimilation over rebellion. In this historical moment that's hyperaware of and desperate to define even the slowest of continental shifts, when commitment succumbs to the logic of capitalism and nobody knows what to call each other or themselves--Gay? Lesbian? Queer? Partners? Dad?--who are we? And if we don't know who we are, what exactly can we offer each other?
Spanning the years 1992 to 2019, and moving from New York to North Carolina to Seattle, the eleven first-person stories in We Had No Rules feature characters who feel the promise of a radically reimagined world but choose complicity instead.

Corinne Manning is a prose writer and literary organizer. Their stories and essays have been published widely, including in Toward an Ethics of Activism and Shadow Map: An Anthology of Survivors of Sexual Assault. Corinne founded The James Franco Review, a project that sought to address implicit bias in the publishing industry.
Loading...
or support indie stores by buying on