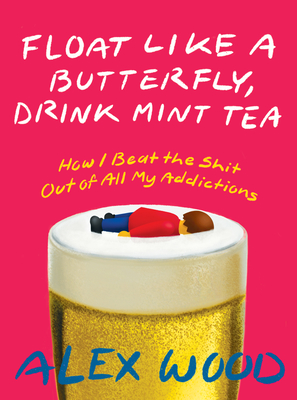 How I Beat the Shit Out of All My Addictions

As an alcoholic, drug-addicted comedian with tendencies to over-indulge and under-achieve since he was a teenager, Alex Wood was on track for to achieve his greatest goals: to die young and drunk. At the age of twenty-eight, feeling desperate in the face of addiction and associated health problems (ulcers, pancreatitis)--which were compounded by the deaths of loved ones and even worse undiagnosed issues--he decided to do something he'd actually been doing all his life: fight.

Alex concocted a plan to quit not only alcohol and drugs, but everything else that he felt was holding him back: cigarettes, caffeine, red meat, dairy, sugar, social media, smartphones, porn, credit cards, nail-biting, social media, and gossip. His biggest weapons? A pair of boxing gloves and plenty of peppermint tea. But as Alex soon learned, people don't change overnight, and sobriety isn't a linear journey; there's heartbreak, relapses, and abuse along the way, but there's also love, support, and lots of laughter. In this memoir, Alex wants to prove that people really can change, or go on a withdrawal- inspired murder spree, whichever comes first.

With plenty of self-effacing wit and grace, Float like a Butterfly, Drink Mint Tea tears down the walls of shame surrounding addiction, providing an honest and open portrait of the stakes involved when one is willing to quit everything in order to survive.

Float like a Butterfly, Drink Mint Tea is the latest title to be published under the Robin's Egg Books imprint. Robin's Egg Books features some of the freshest, smartest, and above all, funniest writing on a variety of culturally relevant subjects. Titles in the imprint are curated and edited by comedian, playwright and author Charles Demers.

Alex Wood is a comedian, writer, and podcaster who has been featured on NBC's Today Show, Kevin Hart's LOL, Vice, and Sirius XM Radio. His podcast How Alex Wood Quit Everything takes listeners on a journey through his addiction and subsequent recovery.
Loading...
or support indie stores by buying on